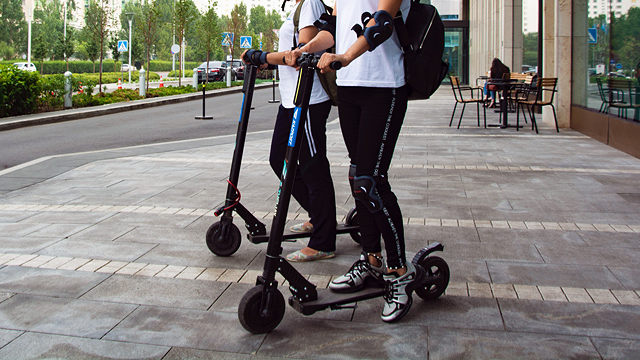 For Your Safety: Avoid Using Motorized Kick Scooters on Highways

And you need a license to operate one.

If you frequent areas like Ortigas Center and Bonifacio Global City on the regular, chances are you've noticed that motorized kick scooters or electric scooters are becoming an increasingly common sight.

It makes sense if you think about it: They're relatively affordable (some branded models sell for just around P20,000), pretty compact, and harmless to the environment if you use an electric-powered unit. All that said, owners of e-scooters should know the limits of the vehicle, as well as the risks involved in riding one especially along national highways like EDSA, Commonwealth, and C-5.

An e-scooter rider was recently caught using the vehicle along EDSA, which got the attention of Metropolitan Manila Development Authority traffic chief Edison "Bong" Nebrija. The government official scolded the rider for using the e-scooter along the nation's busiest thoroughfare, and without proper signaling devices to boot. The encounter was posted on Nebrija's Facebook page on October 16, and has since earned almost 200,000 views.

"Ang sinasabi ko sa inyo, do not take that risk," he explained to the rider. "Pwede naman kayo mag-inner road if you want, but not on EDSA." He gestured to the buses on the road, reiterating, "I'm just after your safety."

Nebrija also added that e-scooter users will soon need to get a license. "May regulation ang [Land Transportation Office] diyan. They will come out with an omnibus regulation on electrical scooters. Ang sinasabi ko sa inyo, you need to be licensed to operate one."

"Kaya kita pinapara is because of your own safety. Not on EDSA, please. Kung motor nga dito, pag nadidisgrasya ng bus, you can just imagine what would be the result. How much more kung ganyan ang dala mo?"

"I'm not discouraging you to use it. I'm just telling you, use it on the sidewalk or use it [on] the inner roads."

Nebrija makes a good point, but at the same time, the lack of viable transportation alternatives is the reason many commuters have turned to this new mode of getting around.