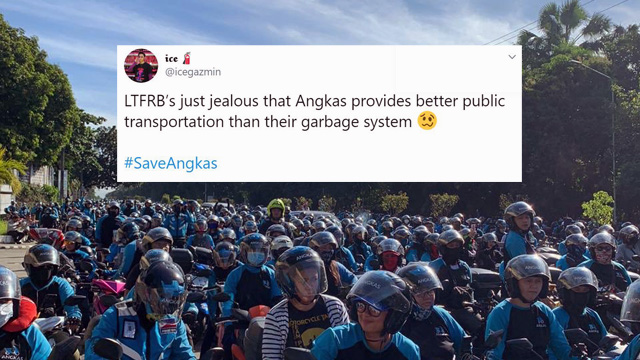 And the LTFRB is getting most of the heat.

(SPOT.ph) Angkas might be all sass and laughs on Twitter, but the motorcycle taxi service has been very serious about its battle for legitimacy in the eyes of the government. The six-month long pilot test of Angkas ended on an explosive note with news that yes, the service is being allowed to continue, but with a cap of 10,000 bikers—which means that 17,000 of the total 27,000 Angkas bikers will be facing unemployment.

A letter by George Royeca, Angkas chief transport advocate, was posted on their official Twitter account on December 21, and promptly set Twitter afire with calls to #SaveAngkas. But according to the Land Transportation Franchising and Regulatory Board, this decision to limit the number of bikers is in line with fostering competition in the industry.

The regulatory body said "Walang basehan ang [argumento ng Angkas] na mawawalan ng trabaho ang 17,000 mula sa 27,000 ninyong riders dahil sila ang mga magiging prospect o potensyal na makukuha ng JoyRide at Move It," in an open letter on Facebook addressed to Royeca. Some of these bikers have been with, and were trained by Angkas, "since 2017," said Royeca in his letter.

Even the Philippine Competition Commission Commissioner Johannes Bernabe himself has spoken against the Land Transportation Franchising and Regulatory Board's decision to place a cap on Angkas' bikers. According to him, Angkas' huge number itself is not the problem: "In a sense, you are taking away what Angkas has worked hard on obtaining, which is a driver base," Bernabe told Inquirer.net.

Twitter has been ablaze with calls to #SaveAngkas since the news broke before Christmas. From reminders of how Angkas has saved commuters to those calling out the Land Transportation Franchising and Regulatory Board for their decision, take a look at some of the most heated tweets below:

Angkas is still the master of shade.

The green-eyed monster is abound.

Behind every little issue is another really huge issue.

Not everyone loves motorcycles, but hey at least they're trying!