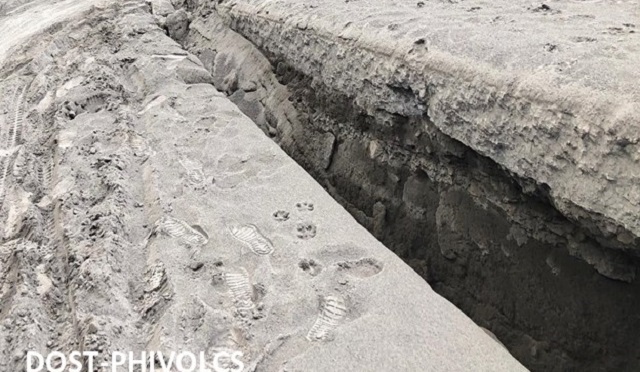 Cracks have been spotted all over Batangas.

(SPOT.ph) Despite a seeming slowdown of activity from Taal Volcano's main crater, the Philippine Institute of Volcanology and Seismology has warned people to stay vigilant. Fissures, or simply put, cracks in the ground, have been spotted all over the province of Batangas, while a total of 466 volcanic earthquakes have been recorded since the afternoon of January 12, according to the institute's latest bulletin.

These cracks in the ground, which are worrying enough, signal activity underground. Fissures are caused by magma moving beneath the volcano, which could in turn cause subsidence, or land suddenly slipping down. All this movement, including the earthquakes, could potentially mean, "umaakyat 'yong volume ng magma na puwede pa mag-supply doon sa eruption ng Taal," said Solidum, in a report by ABS-CBN.

The volcano remains on Alert Level 4 as of the morning of January 15; it continues to spew ash in columns nearly a kilometer tall, according to the PHIVOLCS bulletin. The institute continues to call for the total evacuation of Taal's Volcano Island and all areas within a 14-kilometer radius.