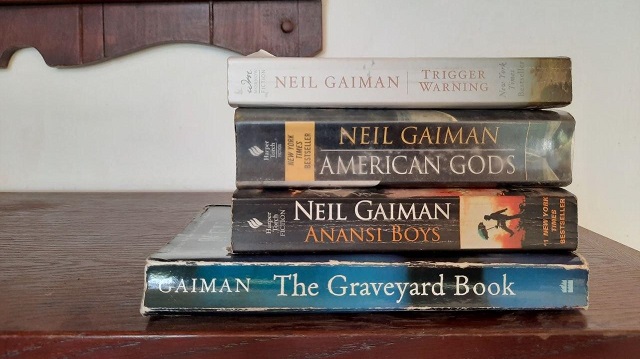 ICYMI: There's a Ton of Cool Neil Gaiman Stuff You Can Check Out Online

(SPOT.ph) Fiction is an escape—if anything, now is the time we most need to keep dreaming (and moving) towards a better future. If you're one of the lucky few who are able to stay home and have the luxury of being bored—we don't mean to sound like your mom, but hey, she has a point—why not keep your brain cells active and check out all the cool stuff on Neil Gaiman's sites? The English author has two sites, https://www.neilgaiman.com/Cool_Stuff (Gaiman's official website) and http://www.mousecircus.com/ (for the young ones), chock full of excerpts, videos, audio, and other fun stuff you can enjoy for free.

As "Neil Himself" said, you can keep yourself busy and—as this is the master of wondrous morbidity—maybe even a little "nervous." Under the "Cool Stuff" section of Gaiman's official website, you can read his short stories (check out A Study in Emerald, a Sherlock Holmers-H.P. Lovecraft crossover you never knew you needed; and How to Talk to Girls at Parties, a borderline-bonkers story of two boys meeting girls who seem more alien than human).

You can also read Gaiman's essays (he wrote about one of the OG masters of macabre, Edgar Allan Poe) and even essays about Gaiman and his works (if you haven't fallen into the complex rabbit hole of The Sandman series, then find out what you're missing out on).

Read the first chapters of his novels (Stardust, Anansi Boys, Neverwhere, among others) and even listen to the first chapter of his short stories' collection, Fragile Things. Gaiman's daughter, Maddy, pops up as an interviewer asking her father about his children's books.

Once you've exhausted all the "Cool Stuff," you can channel your inner kid—or call whichever younger human is available in your house—and check out the works on the Mouse Circus site. Gaiman, for all his so-called darkness, is also known for his sometimes-creepy-but-always-wondrous children's tales.

You can watch the author read in entirety two of his most beloved children's novels: The Graveyard Book, about an orphaned child named Bod—short for "Nobody"—who is raised by ghosts in a graveyard after his family is murdered; and the ever-popular Coraline, which we can't even begin to explain and feel we really don't need to.

At the very least, you could spend a few hours in your own mind; at most, you might be motivated to do something. Whether to sweep up the floor or start a drive to help those in need—heck, if you can, a scientific breakthrough would be great right now—every little thing counts.

Adventurer Savvy Seasoned Neil Gaiman Reads Tpc-000001 Tpc-000002
Your Guide to Thriving in This Strange New World
Staying
In? What to watch, what to eat, and where to shop from home
OR
Heading
Out? What you need to know to stay safe when heading out