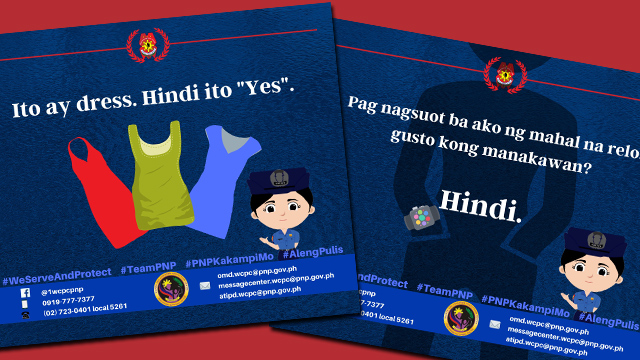 In a post on June 22, they explained through the fictional character Aleng Pulis: "Ang istilo o pamamaraan ng pananamit ng isang indibidwal ay hindi imbitasyon o excuse para gumawa ng krimen." This was compared to the fact that getting robbed is not a direct result of you wearing an expensive watch.

This idea was echoed in another post on June 23, which came with an eye-catching and easy-to-remember phrase: "Ito ay dress. Hindi ito 'yes'."

Victim-blaming, e.g. how women dress or how women act, has always been an argument in defense of rapists. Ben Tulfo, for example, said in a post on June 14 that "a rapist or a juvenile sex offender's desire to commit a crime will always be there. All they need is an opportunity, when to commit the crime. Sexy ladies, careful with the way you dress up! You are inviting the beast."

"Rape culture is real and a product of this precise line of thinking," Kakie Pangilinan, who was directly addressed by Tulfo, said in response.

"There is no dress code for rape. Or for sexual harassment. Instead of teaching women how to dress, we should teach men not to rape," Risa Hontiveros posted on June 11 following the Lucban Police Station issue.

Rape Philippine National Police Social Media Adventurer Savvy Seasoned New Normal Opinions
Your Guide to Thriving in This Strange New World
Staying
In? What to watch, what to eat, and where to shop from home
OR
Heading
Out? What you need to know to stay safe when heading out