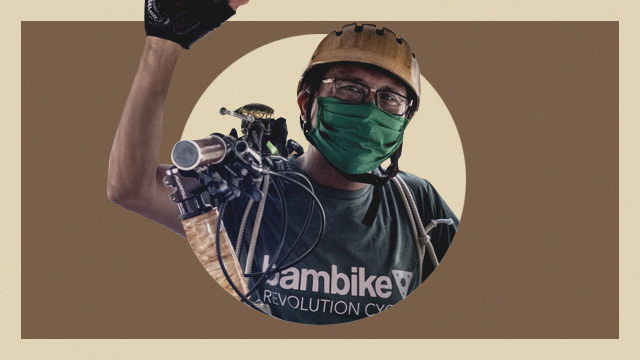 Perhaps a seminar with all violators in one place isn't the best solution.

(SPOT.ph) It makes sense for those who violate quarantine restrictions to be properly and fairly sanctioned, this much we can all agree on. Lecturing them on the errors of their ways makes sense, too—but the logic seems to end when they're all brought together in one place for the said seminar. This was a similar point that journalist Howie Severino made after he was briefly detained on Wednesday, July 8, for not wearing a mask while taking a water break during a bike ride in Quezon City.

Severino took to Twitter the morning after the incident to say that gathering violators does not help at all in terms of preventing COVID-19. "If anything, it seems a perfect way to spread the infection," he wrote.

After being apprehended, the journalist was brought to the Amoranto Stadium for a seminar, "where hundreds of people rounded up were already there milling around, interacting with law enforcers, or penned inside a basketball court, a super-spreader event if I ever saw one," he wrote in a Facebook post regarding the incident.

Instead of gathering those apprehended in one place, Severino suggested via Twitter to have the same uniformed personnel immediately explain why folks need to wear masks, or hand out masks to those without them. "[This method] will be more effective and does not lead to mass gatherings of arrested people mixing [with] law enforcers," he pointed out. Note to QC: It's what Mandaluyong police officers do.

Still, the journalist noted that "I am kind of glad that since [Quezon City] is an epicenter of the disease in the Philippines, they are finally doing something," on his Facebook post, adding, "even if it’s a bit draconian and misguided."

In June, TV and Radio personality KC Montero also called out law enforcers for "backwards social distancing." He, along with 100 or so individuals were loaded into trucks and brought to a covered court by Makati City police after they were apprehended for violating social distancing rules at a roofdeck bar.