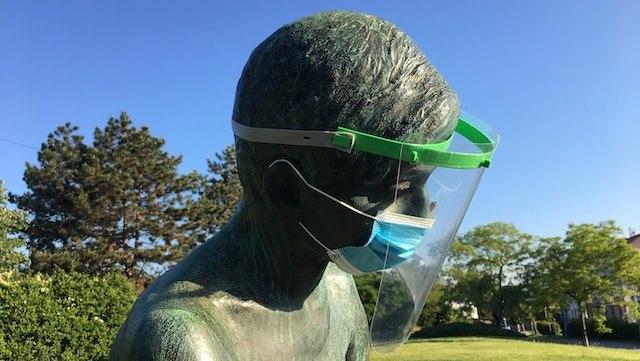 Aside from face masks, Roque stated that face shields are now part of the minimum health standards.

(SPOT.ph) Looks like Metro Manila is sticking to a GCQ "purgatory," based on an announcement by President  Rodrigo Duterte on July 31. This semi-strict limbo—between an enhanced community quarantine and a modified one, as he described it—will also have added measures and "conditionalities" implemented in places where the COVID-19 numbers continue to spike. One of these conditions is wearing a face shield as an added minimum health standard, as stated by Presidential Spokesperson Harry Roque in the recorded address.

These face shields are a requirement for places in localized lockdowns, according to Reportr. Lockdowns will be implemented in barangays wherein cases have reached 80% of the population. Along with the added minimum health standard of face shields, there will also be "massive" targeted testing, intensified tracing and quarantine of close contacts.

Meanwhile, CNN Philippines first reported that the requirement will be enforced "for areas with a high number of COVID-19 cases," in Metro Manila and Calabarzon as per Roque's statement. However, the official Inter-Agency Task Force resolution did not specify the face shields. When asked for clarification, the spokesperson replied the shields were "recommended."

Face masks were announced to be mandatory in public places on April 2, as per the Inter-Agency Task Force. If you're looking for added security measurs, it looks like face shields will now be part of your armor when going out, too!

UPDATE (July 31, 2020): This article was updated following an article from Reportr and CNN Philippines clarifying the announcement of Harry Roque.

Adventurer Savvy Seasoned Covid-19 Covid-19 Government Harry Roque City Life
Your Guide to Thriving in This Strange New World
Staying
In? What to watch, what to eat, and where to shop from home
OR
Heading
Out? What you need to know to stay safe when heading out