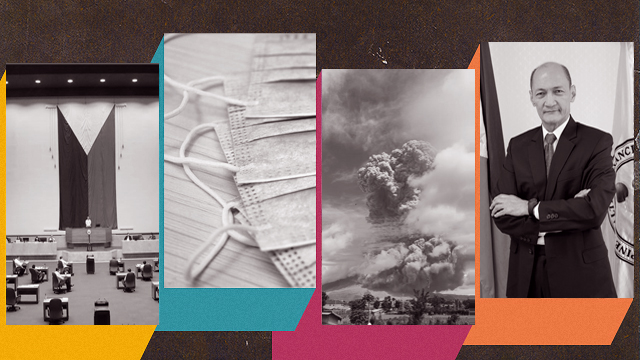 House approves Bayanihan 2 bill on its third and final reading.

(SPOT.ph) The first 10 days of August are nearly over! We round up some of the biggest news of today, so you can get up to speed.

Here's what you should know about the news today, August 10:

Wearing of face masks at home

Interior Secretary Eduardo Año encourages families to practice physical distancing at home, and to wear face masks even inside the home if distancing is impossible. He gave this advice during an interview on GMA News' Unang Balita, noting that transmission was now at the level of the family. "Rich or poor talagang buong pamilya... ang pinaka-importante diyan kung talagang di nila maiwasan, magsuot sila ng mask," he was quoted as saying.

The follow-up bill to the "Bayanihan To Heal As One Act" was approved by the House of Representatives on its third and final reading on August 10. "Bayanihan to Recover As One Act," a.k.a. Bayanihan 2, is meant to mitigate the impact of the COVID-19 pandemic. Under the house bill, a P162-billion fund will be used to help the economy.

A volcano on Indonesia's Sumatra island spewed massive amounts of ash, smoke, and other volcanic materials after a series of small eruptions last weekend. The column reached around 5,000 meters upwards. No injuries or deaths were reported. The last time Mt. Sinabung erupted was in 2016, killing seven people.

Will we ever get to the bottom of the alleged P15 billion? Philippine Health Insurance Corp. president Ricardo Morales has officially filed for a medical leave with his superiors, he told CNN Philippines. He is yet to receive a reply. News broke over the weekend that he and Chief Operating Officer Arnel De Jesus have asked to be excused from the scheduled August 11 congressional hearing for medical reasons.

Despite opposition from educators' groups, Education Secretary Leonor Briones is firm on the department's decision to start school on August 24—with a shift to the highly-divisive blended learning. "Ayaw natin maiwanan sila ng panahon," she said in a press conference. Groups say the school system is still unprepared to take on the shift to digital for the incoming academic year.

Adventurer Savvy Seasoned News Roundup Government Philhealth Department Of Education Deped Indonesia News
Your Guide to Thriving in This Strange New World
Staying
In? What to watch, what to eat, and where to shop from home
OR
Heading
Out? What you need to know to stay safe when heading out