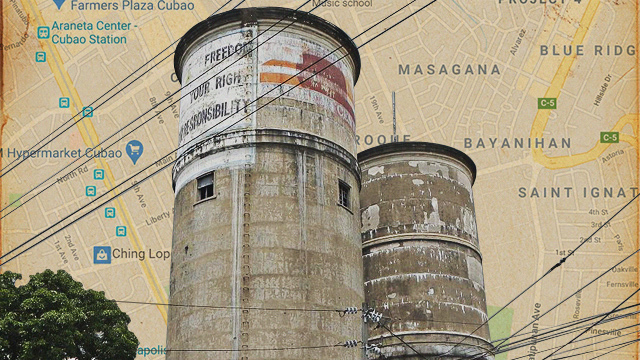 Did you know they were built during the American occupation?

(SPOT.ph) If you've lived in Metro Manila for most of your life, you're likely to have found yourself sitting in traffic in Quezon City. And if you're a QC resident, it's even likelier that you've found yourself on Bonny Serrano, looking up at some very old-looking water towers. The two water towers on the corner of Col. Bonny Serrano and 15th Avenue may have become overshadowed by the many buildings that have begun crowding the area, but the concrete towers remain, and while you might have wondered why they're still there, you probably never considered they'd have historical value. The massive concrete structures have been there since Serrano was still known as Santolan, since the area was called Camp Murphy—and in fact, all the way back to the American occupation in the 1930s.

The History of the Quezon City Water Towers

The towers were built by the Americans sometime in the 1930s, said Ronald Espulgar, barangay councilor, in a 2014 Inquirer report. One tank is slightly smaller as it was built sometime after the first, presumably due to the growing population in the Cubao area. Both stand right across the main gate of Camp Aguinaldo, the military's headquarters.

At the time, Camp Aguinaldo was known as Camp Murphy, named by American forces after Frank Murphy, the first high commissioner of the Philippines (a.k.a. The U.S. president's rep to the country). Part of the base was the Zablan airfield, a vital airstrip later used by Japanese forces during World War II.

After the war, Camp Murphy was split into two—which made sense since Highway 54 (yup, EDSA's old name) ran right through it—namely Camp Aguinaldo for the Armed Forces and Camp Crame for the national police (then known as the Philippine Constabulary). This also explains all the jeeps that ply the Cubao-Murphy route.

During all the changes in the area, the two water towers were turned over to the then National Waterworks and Sewerage Authority, now known as the Metropolitan Waterworks and Sewerage System. They became nonoperational in the 1950s and the lowers floors were converted into offices for the Barangay Socorro administration in the '60s. Since then, the two towers have survived damage from earthquakes as well as the 1989 coup attempt against then President Cory Aquino.

Barangay officials succesfully urged the Quezon City council to file a resolution declaring the water tanks a national heritage site in 2014. Most of the stories by then had become part of oral tradition in the area; official documents detailing the story of the pre-war towers are scarce.

The compound where the water towers are located now contains several of the barangay's offices: the main barangay hall, a healthcare clinic, daycare center, and even a basketball court, but, as of 2014, are still owned by the water concessionaire.

Just a few kilometers away stands the old Balara Filters Park in Pansol, Quezon City, where one of the first massive-scale water filtration plants were built in 1938 to treat water coming in from La Mesa Dam. The 60-hectare property is home to a colossal water tank, Art Deco-style buildings, and more—another historical landmark in need of more attention.

Around the world, water towers represent more than just a utalitarian purpose. While the system may be outdated today, burgeoning cities across history depended on these structures for their needs—with some designing elaborate towers that are now considered historical landmarks. The historic Chicago Water Tower is a treasured site. It used to house a 135 foot iron standpipe used to regulate water pressure and was designed by William W. Boyington, a prolofic architect. The structure was also one of the few structures to survive the Great Fire of 1871.

In the city of Wroclaw, Poland, stands this massive water tower built around 1904. Its design was based on medieval castles and was built with a flat base to house operators and employees. What's special about this structure is that the designers built it complete with an electric lift to bring folks up to a viewing deck. On particularly good days you can see the Sudety Mountains from 100 kilometers away.

As for those unmistakable water towers in Quezon City, the barangay councilors are still waiting on an update from city officials regarding their status as a heritage site, explained Kagawad Fred Navarra in a phone interview with SPOT.ph. Navarra has been part of the barangay council since 2013 and was among the group that pushed for the city resolution. After having survived for nearly a century with minimum upkeep, it's about time the pre-war structures get the recognition they deserve.

Adventurer Savvy Seasoned Quezon City History Heritage
Your Guide to Thriving in This Strange New World
Staying
In? What to watch, what to eat, and where to shop from home
OR
Heading
Out? What you need to know to stay safe when heading out