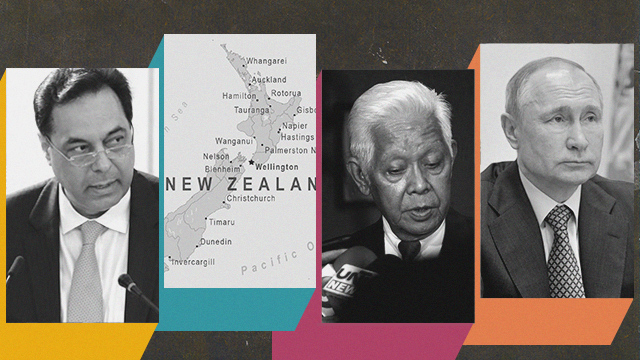 Tuesday's world news is a bit of a rollercoaster.

(SPOT.ph) Too tired to catch up on news? We round up what trended in the last 24 hours so you won't have to go down that rabbit hole.

Here are the headlines you might have missed today, August 11:

Department of Health confirms they have no contact tracing team

The Department of Health advised the public to be wary of fake contact tracers who say that they're from the health agency. "They maliciously ask for personal information and extorn money in the process," they said in a statement. The matter has since been coordinated with the Philippine National Police and the National Bureau of Investigation. "The public is reminded that the Department of Health (DOH) does not have a contact tracing time," the agency confirmed.

President Vladimir Putin announced that Russia has developed a vaccine offering "sustainable immunity" against COVID-19. "This morning, for the first time in the world, a vaccine against the new coronavirus was registered...One of my daughters had this vaccine. I think in this sense she took part in the experiment," he said in a televised video conference.

Lebanese Prime Minister Hassan Diab announced his resignation on Monday evening, August 10 (Beirut time) a week after the massive explosion in Beirut. Tens and thousands of protesters march the streets of Lebanon demanding government accountability and blaming widespread corruption among their leaders as the cause of this tragic incident. While Lebanese President Michel Aoun accepted his resignation, Diab was asked to continue performing his duties until a new government is installed.

After 102 days of being COVID 19-free, New Zealand announced its first locally transmitted coronavirus infection on Tuesday, August 11. There are now four confirmed cases in one family acquired from an unknown source in South Auckland. "After 102 days, we have our first cases of COVID-19 outside of managed isolation or quarantine facilities...We have all worked incredibly hard to prevent this scenario...We have also planned and prepared for it," Prime Minister Jacinda Arden assured her constituents. From August 12 to 14, the entire Auckland region will be on Alert Level 3, which means that travel in and out of the region is restricted to essential travel. Residents should stay home unless they are essential workers.

Former COMELEC chairman passes away at 80

Adventurer Savvy Seasoned News News Roundup
Your Guide to Thriving in This Strange New World
Staying
In? What to watch, what to eat, and where to shop from home
OR
Heading
Out? What you need to know to stay safe when heading out