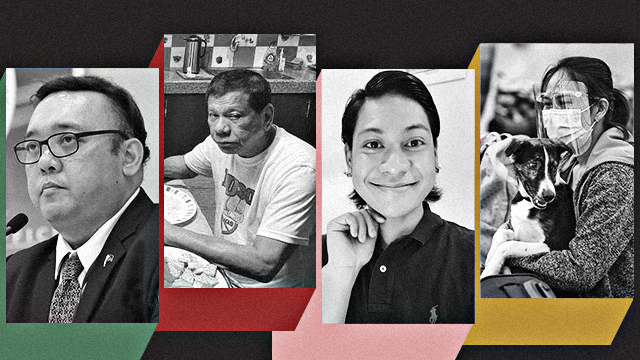 (SPOT.ph) Monday blues hit you hard? We feel you. If you can't handle all the headlines flying in, we lay down the details you need to know in an easily edible format.

Here are the headlines you might have missed today, August 17:

The Palace denied reports that President Rodrigo Duterte left the country over the weekend. Amid the rumor mill going haywire, Senator Bong Go released a picture of the president having a meal with his common-law-wife, Honeylet Avanceña and their daughter, Kitty in Davao supposedly today. Go said he released the photo to dispel "fake news" about the 75-year-old president.

...and is said to be in "perpetual isolation"

The President is now in "perpetual isolation" according to the Palace. "He’s in perpetual isolation, in the sense that the [Presidential Security Group] has done a very good job in making sure that no one really comes close to the President," explained spokesperson Harry Roque. Duterte has also been undergoing regular RT-PCR swab tests. This comes after Interior Secretary Eduardo Año announced that he tested positive for COVID-19 for the second time on Sunday, August 16.

Roque draws flak for his comment on an adult joblessness survey

Speaking of Roque, people online went after him after he once again celebrated something that was not at all meant to be celebrated. He remarked that he was "surprised at our resilience" after a recent SWS survey on unemployment in the country, as "45% pa lang po ang nawawalan ng trabaho." Remember when he cheered after we "beat" the UP prediction for COVID-19 cases in June?

First things first: This specific strain of the SARS-CoV-2 is possibly more contagious but not deadlier than the first one. The G614 strain—with a mutation that may "increase the viral rate of transmission"—was detected by the Philippine Genome Center in samples from Quezon City. The Department of Health, however, clarified that there is not enough evidence to say whether or not this particular strain is the one currently spreading across the nation.

Before President Duterte's scheduled announcement—through a virtual meeting—tonight on the fate of the capital after the MECQ ends on August 18, Metro Manila mayors decided to recommend a return to GCQ but with stricter guidelines. This will be similar to the Metro's initial shift to GCQ in June.

"Auntie Julie" came to slay on the Twitterverse after Macoy Averilla, better known as Macoy Dubs, introduced the new persona over the weekend. Portraying every "Tita of Manila" that you know rolled into one hilarious skit, Averilla put up a series of short films of different scenarios as "Auntie Julie"—and people just couldn't get enough.

Adventurer Savvy Seasoned News Roundup Duterte Roque Government Covid-19
Your Guide to Thriving in This Strange New World
Staying
In? What to watch, what to eat, and where to shop from home
OR
Heading
Out? What you need to know to stay safe when heading out