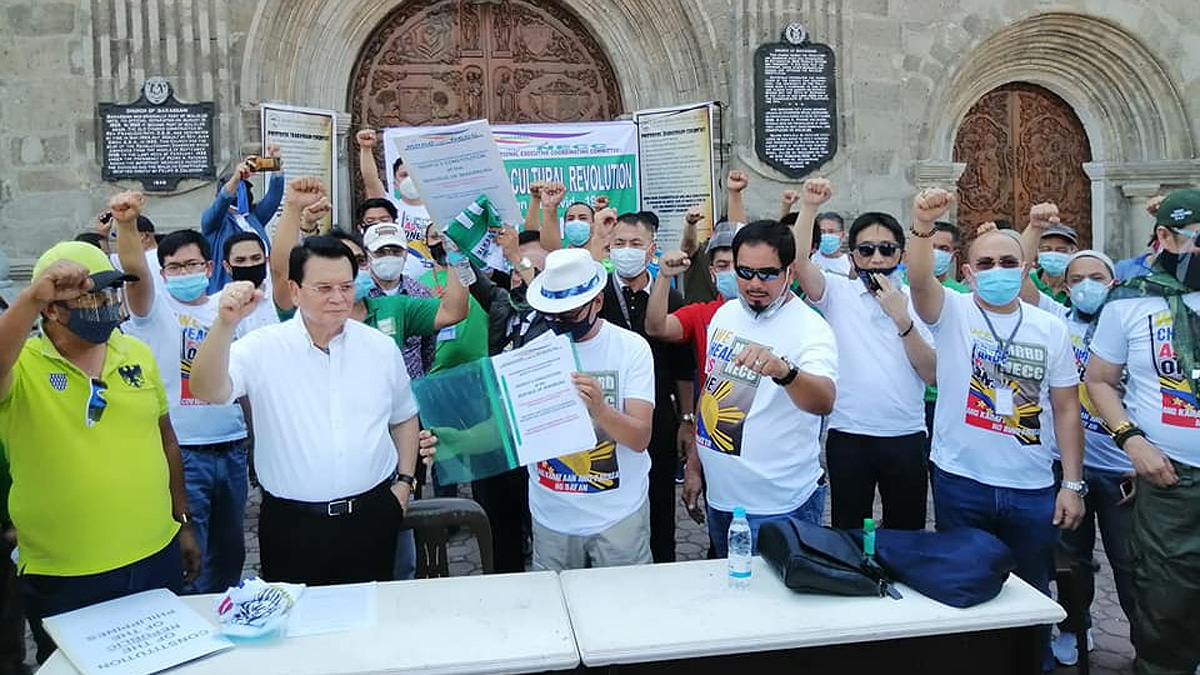 Is the President Sure He Doesn't Know Anyone From the RevGov Movement?

(SPOT.ph) On July 25, supporters of President Rodrigo Duterte called Mayor Rodrigo Roa Duterte–National Executive Coordinating Committee gathered in front of Barasoain Church in Bulacan to reiterate their call for charter change. One of their proposed plans is "a cultural revolution via a revolutionary government that is peaceful, armless, and non-violent." Among the attendees of the assembly was Department of Interior and Local Government Undersecretary Martin Diño. A month later, the group launched the People’s National Coalition for Revolutionary Government and Charter-Change on August 22 in Clark, Pampanga.

Department of Defense Secretary Delfin Lorenzana has said that the leaders of MRRD-NECC should be investigated, adding that the group's move to declare a revolutionary government is "illegal and unconstitutional."

In Duterte's weekly address to the nation on August 25, his response to the call for a revolutionary government was: "Wala akong pakialam dyan. Wala akong kilalang tao dyan."

Who Are the Members of the MRRD-NECC, the Group Calling for a Revolutionary Government?

Mamondiong was appointed by Duterte in 2016. "He will be the Secretary of Tesda. It is a Cabinet position," the president said in a during a gathering of Muslim leaders on July 8, 2016 in Davao City. Mamondiong resigned in October 2018.

Castriciones was also appointed by Duterte as acting Agrarian Reform Secretary in December 2017. His position was confirmed by Commission on Appointments in May 2018.

Diño—one of the members of MRRD-NECC who attended the assembly in front of Barasoain Church in July—was appointed by Duterte as Department of Interior and Local Government undersecretary in January 2018. He also served as the presidential candidate of Partido Demokratiko Pilipino–Lakas ng Bayan in the May 2016 elections, a candidacy he relinquished when Duterte decided to run for president. His daughter Liza Diño-Seguerra was appointed as Film Development Council of the Philippines chairperson in August 2018.

In a report by Manila Bulletin, San Beda College Graduate School of Law Dean Fr. Ranhillo Aquino said that the undersecretary should be barred from joining the group since he has the duty to protect the Constitution as a government official. The dean added that the declaration of MRDD-NECC spokesman Bobbie Brillante for the establishment of a revolutionary government is "alarming and scary."

Diño was later defended by Usec. Epimaco Densing who said that the DILG official attended the July assembly outside office hours, making it separate from his official function. "I was told that when they launched that in front of Barasoain Church in Bulacan, it was a holiday. So he has a right to be there and express his opinion," Densing said in an interview with One News PH.

Revolutionary Government President Rodrigo Duterte Duterte Adventurer Savvy Seasoned News
Your Guide to Thriving in This Strange New World
Staying
In? What to watch, what to eat, and where to shop from home
OR
Heading
Out? What you need to know to stay safe when heading out