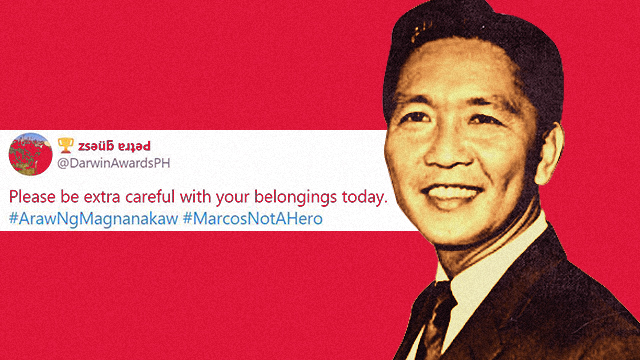 (SPOT.ph) Well, September 11 is here and people across the Philippines are marking it in very different ways (to say the least). Ferdinand Marcos was born exactly 103 years ago today in Ilocos Norte. The controversial figure went on to become President of the Philippines, placing the entire country under martial law from 1972 and well into the turbulent first half of the '80s. While this special date is already considered "Marcos Day" in his home region—and appears to be on its way to become a legitimate local holiday—folks have taken to Twitter with the trending topic #ArawNgMagnanakaw.

In case you didn't know, Ferdinand Marcos holds a Guiness World record for "Greatest Robbery of a Government." The amount recorded by this globally recognized bearer of fun and sometimes terrifying facts? "The government of the Philippines announced on 23 April 1986 that it had succeeded in identifying U.S. $860.8 million (£569.5 million) salted away by the former President Ferdinand Edralin Marcos (1917–1989) and his wife Imelda. The total national loss from November 1965 was believed to be U.S. $5 to $10 billion," it says on its website. At its ceiling, that's around P485 billion.

Marcos' wife, Imelda Marcos, was found guilty of corruption in 1993 but was cleared of charges in 1998 after an appeal, added the Guinness site. Again, in August 2019, Imelda was convicted of graft for using her position as Minister of Human Settlements to maintain Swiss bank accounts during her husband Ferdinand Marcos' regime. She evaded prison time by posting a bail of P300,000.

Ferdinand Marcos also occupies the Top 2 spot on Forbes' list of "The World's All-Time Most Corrupt Leaders." Another former Philippine president, Joseph Estrada, takes the 10th spot with an estimated U.S. $78 million to U.S. $80 million embezzled from the nation.

With the anniversary of the declaration of martial law on September 21 looming as well, the hashtag has taken on a life of its own on Twitter. We round up some of the most fiery tweets on the trending topic we've seen.

Adventurer Savvy Seasoned Twitter Humor History Ferdinand Marcos Trending Reactions
Your Guide to Thriving in This Strange New World
Staying
In? What to watch, what to eat, and where to shop from home
OR
Heading
Out? What you need to know to stay safe when heading out