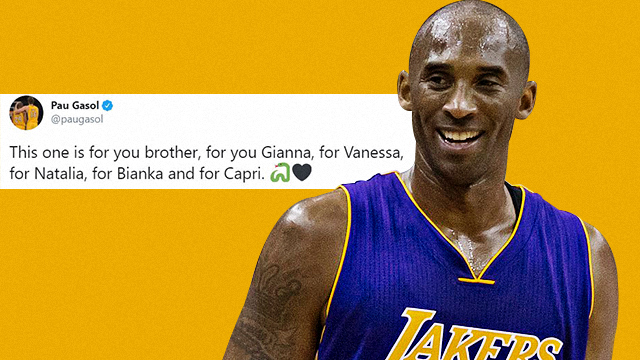 Chants of "Kobe" were even heard in downtown Los Angeles.

(SPOT.ph) The Los Angeles Lakers are now the 2020 NBA champions after overpowering Miami Heat Sunday night, October 11—tying them with the Boston Celtics for franchise with the most NBA titles at 17 each. The name LeBron James is on everyone's lips now as he takes the title of Most Valuable Player. Amid all the wins and celebrations, though, the presence of one who may not have been physically present has definitely been felt: the late Lakers legend Kobe Bryant.

In their first game after Bryant's untimely death—along with 13-year-old daughter Gianna and seven other passengers of a fatal helicopter crash in January—James gave a heartfelt speech. "I want to continue, along with my teammates, his legacy. Not just for this year, but for as long as we can play the game of basketball that we love, because that's what Kobe Bryant would want," he said. "So in the words of Kobe Bryant, 'Mamba out.' But in the words of us, not forgotten. Live on, brother."

And it is clear the team has delivered. They played the entire season honoring Bryant, wearing jerseys designed by him, chanting "1-2-3-Mamba!" during huddles, dedicating points to him; never letting his spirit die out. Now that they've taken the championship, the memory of Bryant's is stronger than ever. "Kobe" is among Twitter's top trends as of writing—check out some of the most heartfelt ways people are remembering the basketball legend below.

Take a look at this touching tribute.

Fans celebrated by chanting his name.

And not just outside the STAPLES Center!

Take a look at the celebrations.

Actress Kerry Washington giving us a moment of faith.

His team made sure to remember him in every way they could.