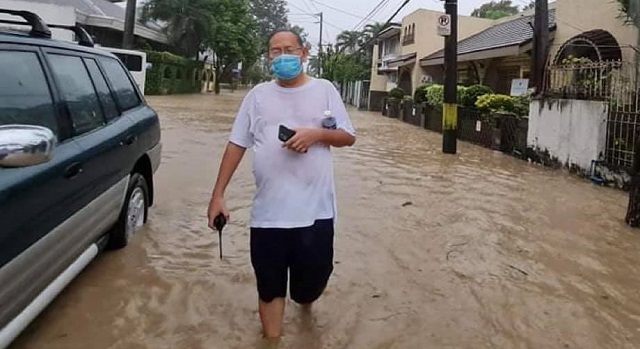 (SPOT.ph) The Marikina River reached water levels of 21.6 meters at 7:58 a.m., reported the city's public information office on Facebook. As Ulysses raged on through the morning of November 12, Thursday, the river surpassed the maximum levels pegged by Marikina Mayor Marcy Teodoro of 21.5 meters that it reached during the onslaught of the 2009 Typhoon Ondoy.

Alarms over the river were sounded by the Marikina Public Information Office (PIO) in the early morning as Metro Manila was lashed by heavy rains and strong winds caused by Typhoon Ulysses. They declared "second alarm" levels when the river reached 16.5 meters at 1:52 a.m., and "third alarm" when it reached 19.2 meters at 4:01 a.m.

Less than three hours later, the PIO marked the water levels at 21.5 meters—the same level it peaked at during Ondoy—as of 7:30 a.m. An update soon after marked the 21.6-meter water level.

Marikina Mayor Marcy Teodoro was spotted wading through knee-high waters near his home in pictures posted by the PIO. Teodoro kept close watch over the situation throughout the night; He visited evacuation sites at the Concepcion Integrated School and Malanday High School in the early hours. Without power, local government relied on radios to keep contact and manage the rescue operation and evacuation sites, according to the post.

Both Marikina and Montalban, Rizal, trended online as users posted pictures of the situation on ground. Calls for rescue in Marikina have also come up online—with many drawing parallels between Ulysses' onslaught and Ondoy's. The Red Cross and local government have already moved to answer the growing calls.