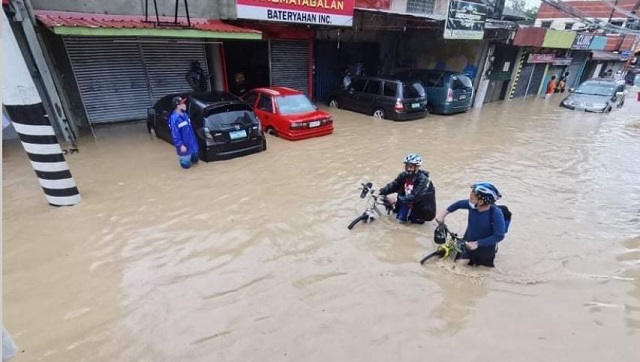 In Ulysses' Path: Scenes From Around the Philippines

Folks everywhere are reeling from the effects of the storm

(SPOT.ph) Typhoon Ulysses is expected to blanket practically all of Luzon in rains today, November 12—even as many are now reeling from the onslaught it brought from the night before. Ulysses first made landfall in Patnanungan, Quezon late Wednesday with maximum sustained winds of 155 kilometers per hour and gusts at 255 kilometers per hour. Several parts of Metro Manila experienced power outages, with Marikina River surpassing the waters levels of 2009's Typhoon Ondoy.

Meanwhile several other regions—some of which were already badly affected by Typhoon Rolly—were also in the direct path of Ulysses. The whole island of Catanduanes in Bicol has had no power since typhoon Rolly.

Ulysses is expected to weaken as it crosses Luzon; the typhoon is forecasted to exit the Philippine Area of Responsibility by tomorrow, November 13. As the storm abates, pictures and posts of the situation on the ground have circulated online with #UlyssesPH the top Twitter trend as of writing. Check out the scenes from around Luzon below.

A dog was seen stuck on a rooftop in San Mateo, Rizal.

Folks have taken to their rooftops as well.

Several calls for rescue have come in from Marikina.

The river continues to rise past its peak during Ondoy.

An explosion was captured by a social media user on video.

Residents of Bulacan say this is the first time they've experienced flooding in decades.

Sustained rains carried on through the night.

The island was badly hit by Typhoon Rolly last week.

Strong winds were felt throughout the storm's onslaught.

A landslide occurred on November 11.

A live wire was seen flailing in the wind.

Flooding was reported in Burias Island by The Red Cross.