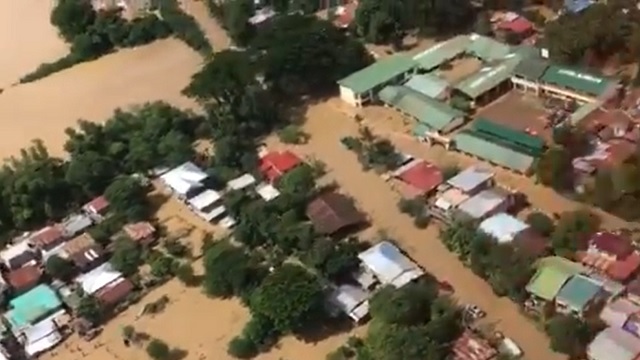 Why Did It Take So Long for News to Break About Severe Floods in Cagayan Valley?

Folks have spent days stuck on their rooftops.

(SPOT.ph) As Central Luzon continues to recover from the aftermath of Typhoon Ulysses, rescue efforts have shifted focus to Northern Luzon—particularly the completely flooded areas in Cagayan Valley. The thing is, Ulysses made landfall on November 11, a full three days before it finally came to national attention that folks in the northern region are still stranded on rooftops, battling floodwaters several storeys high. The #CagayanNeedsHelp started gaining traction on Twitter on November 13—with many asking to help spread word about Cagayan's dire situation.

Throughout Friday night, many tuned in to updates on rescue efforts via Vice President Leni Robredo's Twitter account. The Vice President coordinated with the Armed Forces and the National Police; The Philippine Coast Guard is continuously posting pictures of the situation on ground in the affected areas of Cagayan and Isabela as well.

Where is the media?

As word began spreading about Cagayan, more and more Twitter users called for media coverage on the situation. They called on all the national level publications to help shed light—but as documentary photographer Ezra Acayan pointed out on his social media pages, getting into Cagayan as of now isn't easy.

Local government mandated all visitors to undergo the usual two-week quarantine under COVID-19 protocols, with no exceptions for "media and aid workers," wrote Acayan. According to the photographer, they found this out as they were prepping plans for Typhoon Rolly coverage.

"I understand media can cover without being physically there. But in a big disaster like this it's crucial to have as many journos on the ground providing VERIFIED and TIMELY info so rescuers can cut through all the noise and quickly decide where to focus their limited resources," added Alcala in another tweet.

The Department of the Interior and Local Government told Cagayan's local government to lift the strict health protocols today, November 14. This is to allow relief, search and rescue teams, as well as media outlets access to the affected areas. Several reports of provincial government barring relief and media teams from crossing the border have been received by the department, according to PTVNews.

"The mayors know best the situation in their areas, so they should use their sound discretion in lifting the restrictions," said Secretary Eduardo Año.

What about news outlets from inside Cagayan?

With national media having difficulty getting inside Cagayan, another question worth asking is why couldn't we rely on newspeople from inside the area. ABS-CBN was also among the trending topics on Twitter. With the leading network's congressional franchise gone, the absence of their regional reportage was very much felt.

TV Patrol Cagayan Valley was a part of ABS-CBN's Regional Network Group, one of the departments that closed down after their bid for a renewed franchise was rejected by congress in July. The Cagayan Valley newscast became part of the TV Patrol Northern Luzon expansion in 2018; this also covered the Cordillera Administrative Region, Ilocos, and parts of Central Luzon.

A total of 12 regional TV Patrol programs had their final newscast on August 28—part of which was the TV Patrol Northern Luzon.