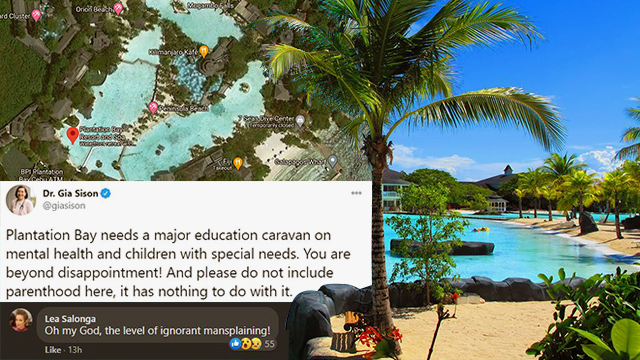 Plantation Bay and The "Resident Shareholder": A Short History

As Lea Salonga put it, "Oh my God, the level of ignorant mansplaining!"

(SPOT.ph) A recent case of poor customer service—and the resulting poorer handling—is making the rounds online. We're sure you've seen those social-media posts calling out a certain Manny Gonzalez of the popular Plantation Bay Resort and Spa in Mactan Island, Lapu-Lapu City, Cebu, and the very, erm, short-tempered response he wrote to a guest complaint. The discussion has gotten big on social media, with statements from advocacy groups, and yup, Gonzalez himself. If you're feeling a little lost, we lay down the facts on the Plantation Bay Issue below!

A review left on TripAdvisor on December 7 detailed how a guest was told off by the resort's lifeguards for their child being too loud. "Every time Fin jumps in the water he’d be so happy that he’d laugh and squeals again. I tried hushing him and at one point tried to cover his mouth. But then I realized this is so wrong? This isn’t right at all!" they wrote. They went on to say that their child has autism and "We need a friendly and empathetic environment for kids and families with special needs." Obviously, that place is not Plantation Bay.

As if that wasn't bad enough already, the response written by Gonzalez as "Resident Shareholder," using the account of general manager Efren Belarmino, exploded online for its dismissal of the guest's complaints. In the screenshots shared by Twitter account @PinoyAkoBlog, Gonzalez questioned the child's diagnosis, writing "Google 'Autism' and verify this for yourself. Therefore this parent is most likely deliberately lying, or has been given an incorrect diagnosis of autism," going so far as to say that the child's behavior is "due to simple parental neglect."

The response written by Gonzalez is still up on the TripAdvisor website as of writing—minus the entire first paragraph. In the rest of his long-winded response, he states that "We have imposed stricter rules on noise-making than other resorts. As a result of our policy, no child in Plantation Bay has ever come to serious harm, much less drowned," and, "To demand that all the customers just shut up while one child screams his head off? That's not our idea of fairness," among many other points, if you can call them that.

The unfeeling response earned much ire online, with calls to #BoycottPlantationBay and to cancel the "shareholder" himself. "Plantation Bay needs a major education caravan on mental health and children with special needs," Dr. Gia Sison, physician and mental health advocate, wrote online.

Lea Salonga also put in her two cents below Cathy Sanchez Babao's post calling out Gonzalez and his response. "On behalf of children with special needs, I will never ever set foot on your resort," wrote Babao.

Folks online also unearthed an old statement of Gonzalez from December 2019, which had the same arrogant tone but this time overtly threatening—and well, we just want to point out the Comic Sans. The statement was posted as a public notice by The Freeman, known as Cebu's oldest newspaper.

An advocacy group, the Autism Strong Philippines, deemed the entire incident "uncalled for, especially the response of the management." They also noted that it is clear from the incident that the "primary stakeholder" is unaware of how to handle situations such as this and his response only furthered stigma against their community. They called for an investigation and sensitivity training for  all the resort's personnel.

The Autism Society Philippines also released a statement on their website. "A disability-compassionate and sympathetic hospitality organization would have gone the extra mile to understand their customer's perspective. Instead, the resort went the other direction," they wrote. The statement called the response "ignorant" of the autism spectrum and said that the "noble men and women who serve to please their customers at the Plantation Bay Resort And Spa in Cebu can do better."

In response to all this, Gonzalez released a statement on the resort's Facebook page on the night of December 8. He stated "I was wrong to question the mother's motives," adding that he regrets seeming as if the resort was not supportive of the special-needs community.

He then went on to reiterate the "safety and relaxation" of guests in the resort—resulting in zero child deaths in almost 25 years. "A mother's pride is important, but more important are the lives of the children who come here." He added, "I handled this case poorly," and finished off with an apology to all those offended by his reply.

The Autism Society has acknowledged the apology in a Facebook post—zeroing in on the parental "pride" comment. They noted, "Sadly, the company has a long way to go."

Adventurer Savvy Cebu Plantation Bay Twitter Trending Lea Salonga Topspot Cebu Regional Heading Out Short History Explainer
Your Guide to Thriving in This Strange New World
Staying
In? What to watch, what to eat, and where to shop from home
OR
Heading
Out? What you need to know to stay safe when heading out