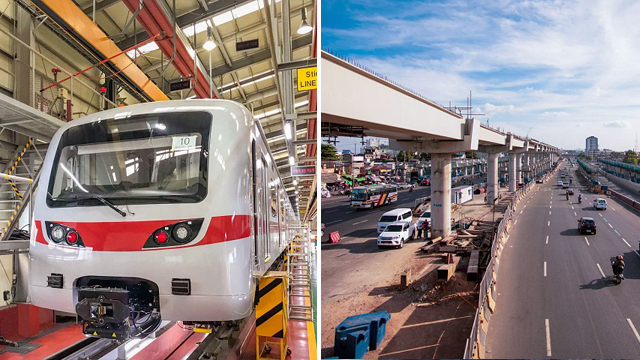 QC To Bulacan In 35 Minutes? MRT-7 Poised to Make It Happen

Here's everything you need to know about the train line.

(SPOT.ph) The Metro Rail Transit Line 7 has officially passed the halfway mark. Progress on one of the most-awaited train projects in Mega Manila is at around 54%, said San Miguel Corporation chief Ramon Ang on February 19—with a target to start operations in December 2022. Even better, they can ideally start test runs between the Quezon City and Bulacan train link by June 2022, which means trainspotters may soon see action on its tracks.

We're sure folks to the north of Manila, especially Commonwealth regulars, have become very familiar with the construction of the Metro Rail Transit Line 7 (MRT-7). The massive project is hard to miss but fingers crossed it's worth it. Below, we list down all the details you should know about one of the Metro's biggest train projects as of today.

Also read:
10 Reasons to Be Excited for Travel and Traffic in 2021
The Metro’s Train Lines Are Getting the Upgrade We Deserve
The Metro Manila Subway Is Set to Begin Operations By 2022

What Route Will the MRT-7 Serve?

The MRT-7 project will link Quezon City to San Jose del Monte, Bulacan with a total of 14 stations spanning around 22 kilometers. The Department of Transportation touted the new train route as being able to cut down travel time between the two urban hubs down to 35 minutes—a huge change for folks used to spending hours on Commonwealth alone. It is expected to serve around 300,000 to 850,000 passengers daily.

What About the Trains?

With this new track lane of course will come new trains: "Now that we’ve crossed the halfway mark, we’re expecting to reach a lot of major milestones for this project this year. This includes the construction of the stations, testing of various equipment in different countries, and the actual arrival of these equipment, including the first batch of trains," said Ang.

Trains have been purchased from the South Korea Hyundai Rotem as advised by the Korea Railroad Corporation. An initial 18 cars, making up six trains, is scheduled for factory-acceptance testing this April in South Korea. If those trains pass the test, the first batch will ideally arrive in 2021 as well.

A total of 36 trains, composed of 108 cars, have been procured by SMC. The company's depot has been equipped to hold up to 150 trains in preparation for future expansions, they clarified in the statement. Ticket vending machines and automatic gates have also been sourced from other countries.

Will the MRT-7 Be Linking Up With Other Train Lines?

The MRT-7 line will eventually connect to the Metro Rail Transit Line 3 and the Light Rail Transit Line 1. This means that someday you could go from the borders of Manila or Pasay all the way to Bulacan just by train; who would have thought that could happen in our lifetime?

The three stations will connect at the planned Unified Grand Central Station, better known as the Common Station. This massive transport hub is under construction near the corner of North Avenue and EDSA and will serve as the link between the three lines, plus the Metro Manila Subway, which is also in the works. Both the subway and the MRT-7 have target deadlines in 2022.

Adventurer Savvy Commute City Life San Miguel Corporation Smc Mrt-7 Mrt Train Heading Out Hard News Followup
Your Guide to Thriving in This Strange New World
Staying
In? What to watch, what to eat, and where to shop from home
OR
Heading
Out? What you need to know to stay safe when heading out