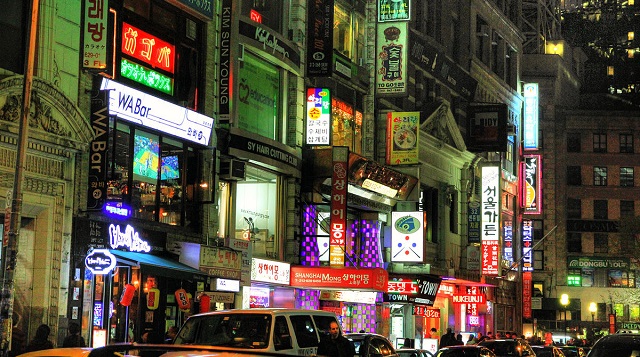 Could we be getting our own Myeong-dong?

(SPOT.ph) So it looks like an official Korea Town will soon pop up in Manila. The plans for a cultural hub for everything Korean to be built in Malate were discussed by Mayor Isko Moreno and South Korean Ambassador Kim In Chul on Tuesday, March 10.

The planned Korea Town is meant "to showcase Korean culture right in the nation’s capital," explained Moreno. So while there are several small hubs of Korean restaurants, groceries, convience stores all over Metro Manila and beyond—not to mention the popular Korea Town in Angeles City, Pampanga— this planned Korea Town will arguably be the first officially sanctioned place for such a community. And with partnership from the South Korean embassy, too!

Plans of a Korea Town in Malate have been in the pipeline for sometime now, with the previous South Korean envoy, Han Dong Man, announcing it in November 2019. No timeline has been announced so far—which gives us plenty of time to dream about what this hotspot for all things Korean will be like.

Korea Town Manila Has Us Dreaming About These Cool, Historic Koreatowns Across the Globe

Often tagged as the "best Koreatown outside of Korea," this historic area in Los Angeles is a product of a century-long story. Folks from South Korea first began moving to the U.S. in the late 19th Century—but it was during the boom in the mid-20th Century that they began settling in this area. A certain Hi Duk Lee, who came to America with a whole lot of business smarts, opened up the first major Korean grocery store in 1971. The Olympic Market became the go-to spot for all Koreans in the area and it soon grew into a community.

Now the L.A. Koreatown is a sprawling area with around 120,000 residents as of 2019. You can spot a multitude of Korean shops, from restaurants to boutiques, businesses, apartments, and everything you can think of, mostly housed in the old Art Deco buildings of Los Angeles' past.

The Korea Town in Toronto, Canada lies mainly along a segment of Bloor Street. It is where you can find all sorts of Korean establishments in a single stretch, from hairdressers to retail, restaurants, and of course, karaoke. We imagine it would take you a whole day to take in the eclectic mix of everything Korean!

Most of the folks who work along the K-Town of Bloor Street don't actually live there so it really is more of a commercial area. Still, this area is famous for being the place where Koreans come together for the annual Dano Spring festival, a tradition they brought from home.

It's no surprise that there are several South Korean enclaves in the massive boroughs of New York City, but the one in Manhattan is arguably the liveliest. In the same neighborhood as Times Square, right between 5th and 6th Avenues, K-Town Manhattan is full of buildings housing Korean gems.

You can walk through streets full of restaurants, karaoke bars, even craft shops and bookstores. There are also spas and wellness centers to drop in and get away from the busy NYC streets.

Adventurer Savvy Seasoned Korea Manila Isko Moreno Los Angeles Travel Toronto Heading Out
Your Guide to Thriving in This Strange New World
Staying
In? What to watch, what to eat, and where to shop from home
OR
Heading
Out? What you need to know to stay safe when heading out