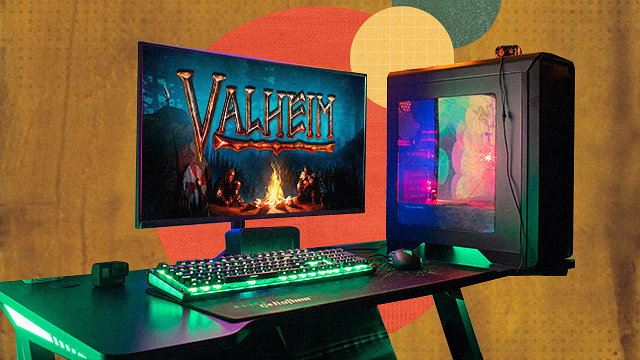 Valheim lets you explore a massive world of possibilities.

(SPOT.ph) The gods must be smiling down on game-development studio Iron Gate Studio, with their game Valheim selling more than six million copies after it was first made available as an early-access game in February. It’s quite a big achievement for a "small Swedish indie game developer" and echoes the hero’s journey one undertakes at the start of Valheim.

We played Valheim and this is what we've discovered:

At the start of the game, you are literally dropped on a mysterious island on a stormy night with nothing more than your ragged clothes. Unlike other games, Valheim has no friendly tutorial to ease you into the game. Instead, you are given vague instructions by Hugin, a talking raven who appears to be speaking for Odin. He suggests that rocks and pieces of wood can be gathered to make basic tools and a fire. It immediately becomes clear that in Valheim, the most pressing need is survival. Yup, this involves making fire and basic tools, foraging, hunting, and building shelter. While giving you a slight nudge in that direction, Hugin also occasionally talks about your world from a Norse mythological aspect. He informs you that the world you inhabit is called Vallheim and eventually, if favored by fate, you will ascend to Valhalla.

When you discover and build most objects in the game, you will see several prompts of what you can build with the right tools and components. For example, building a hammer requires some stone and wood. When you build this hammer, you can build a workbench which then lets you build wooden structures and other more complex objects.

The island you first inhabit is a land of rolling green hills, dense tree growth, and roaming wild animals like boars and deer. The clear waters on the shoreline beckons you for a swim. At night, when you look up at the sky, you can clearly see the colossal gnarled glowing branches of Yggdrasil, the World-Tree. It seems more like a vacation at first until you realize how harsh it really is. Some animals attack without provocation, you get weak if you don’t eat, and wet and cold if you don’t build a shelter. And when your health reaches zero, you die.

The thing is, dying is a temporary setback. You are resurrected again, but this time wearing only a loincloth and oddly, you can visit the last place where you died to retrieve your belongings buried beneath your grave marker. Your island in Valheim is vast and unrevealed on your map and you have to do a lot of exploring to get a proper lay of the land. Valheim’s changing weather and day and night cycle encourages you to stay in your shelter at night. Some creatures also get more aggressive at night.

It is when the moon starts to rise or when you start to venture out in the forest you discover far more hostile creatures than wild boar. Forest-dwelling creatures known as Greydwarves who look like horrific ents with glowing eyes will attack you in sight. Taking an axe to their quarters reduces them to a piece of wood and resin. It turns out,  you can make a standing torch from their drops. Also, as creatures made of wood, their main weakness is fire so they have an aversion to a lit torch. Almost every item drop after creatures are killed have some use or become an ingredient in crafting other items.

All this happens in just the first few hours of gameplay alone. From a rudimentary shack, you will discover that with enough chopped wood, you can make a more modest house. To prevent monsters from attacking you especially at night, you can build a wall around your area for added protection. At around this time, you have made your first base. While searching for edible items like berries and mushrooms, you may also have ventured farther into the forest to discover hidden crypts that’s inhabited by sword-wielding skeletons. Or another far more intimidating monster that’s more than 20 feet tall. Whether you want to launch a volley of arrows or outrun it, it’s up to you. At the back of your head, killing it may yield some new precious loot.

Perhaps the most noticeable thing about Valheim is the game’s graphics. It treads the line between retro and eye-popping awesome. Players of older generation consoles will immediately notice that the game's character models look like it was from the first early PlayStation era. But the moment you look around while taking in the light filtered from the tree tops, the sun glinting on the wet rocks and the surface of the sea, and the fog creeping in at night, you will see graphics that resemble far modern games like Skyrim and The Witcher 3. The atmospheric effects can really send a chill down your spine in the game’s more foreboding areas like murky swamps. The environments in Valheim are a sight to behold. On the audio side, the game has no voice acting but the instrumental soundtrack that serves as a lingering musical cue to each environment actively changes when there is an impending danger or fight is almost movie-like.

That is just Valheim in single-player. It is in multiplayer that Valheim transforms from a good game to a vastly superior one. In co-op mode, other players can enter your world to help you out with either mundane tasks like trading items, hunting and gathering wood, and exploring dungeons and slaying giant monsters. Similarly, you can also enter their game to play around in their world. What gives Valheim immense replayability is that each world is randomly created for the player. The shape and features of their island will be different from yours, as well as the location of the game’s main bosses.

Valheim has no preset missions like in most games but defeating the game’s various bosses allows you access to more advanced technology, though it's not a pressing need. In Valheim, you can continue building and exploring as much as you want while developing better tools and weapons. Defeating the main bosses can be a secondary goal. Like most tasks in the game, some require more preparation than others but because of the game’s procedurally-generated and randomized nature, anything can happen.

It takes a lot to defeat a boss, from building a Viking longship to travel to a far-off island located in an unexplored area of the map. Because of the immense fog of war, traversing distant lands can be dangerous. Sailing in the game requires a different skill set than fighting monsters or building a log cabin. The winds can sometimes blow in a different direction so you have to keep orienting your sail wherever it is blowing while using a finicky rudder to steer the ship. If there's no wind or you need more precise control of the craft, you have to shift to the oar. On your way to another island, you might get beached on another hostile island because of thick fog or while traversing the ocean, a sea monster might take a bite out of your boat.

In one particular game, you might end up dying on another island so you’d need to undertake a second journey to retrieve your items. And this is happening while you have yet to achieve your main goal of reaching one of the game’s main bosses. In fact, in your quest to reach new areas, you will discover different landscapes or biomes that’s vastly different and more dangerous than your picturesque meadow lands.

After killing the main boss on a remote island, you get to discover new creatures you haven’t encountered before. Everything that you’ve learned, including your old weapons, are suddenly ineffectual. The game reminds you of the overarching theme of survival once again and resourcefulness is the only solution when facing new threats. You have to find a way to upgrade your old gear. Mining metal ores such as copper and tin all around your map can result in the creation of refined metal ingots which are needed so you can forge new bronze weapons and armor—that is, assuming you’ve already built a smelter and a forge. From the Stone Age, you have progressed to the Bronze Age. In your quest to discover new lands to mine new ores, Valheim can also be seen as a commentary on the age of colonization.

Along with the progress in creating new weapons, Valheim also lets you indulge in other pastoral aspects such as home building, raising livestock, farming, and fishing. Saying that Valheim is a survival game is both accurate and an understatement with the amount of things that you can do in the game. So, with everything said, what is Valheim exactly? It is a fantasy hack-and-slash RPG, an architectural and building simulator, an exploration and conquest game, a resource-management game, a farming simulator, a sailing game, and more. It’s also one hell of a great time to spend online with other virtual Vikings on this incredible Midgard-created simulator.

Valheim is available on early access on Steam for P449.50 for Windows PC.

Adventurer Savvy App Staying In Valheim Tech Con-00263 Steam Seasoned
Your Guide to Thriving in This Strange New World
Staying
In? What to watch, what to eat, and where to shop from home
OR
Heading
Out? What you need to know to stay safe when heading out