Unique History of Hospicio De San Jose in the Pasig River
Loading
Already a member? Log in
No account yet? Create Account
Spot.ph is your one-stop urban lifestyle guide to the best of Manila. 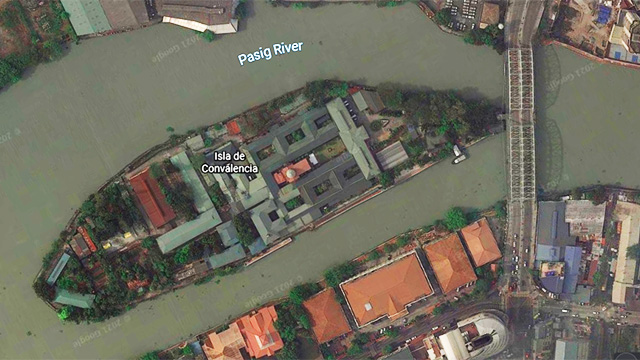 The Pasig River's Lone Island and Its 19th-Century Orphanage

It can only be accessed via the Ayala Bridge.

(SPOT.ph) Almost every resident or worker in Metro Manila or nearby areas has passed even just a tiny segment of the Pasig River. This major waterway starts from Laguna de Bay and goes through Pasig, Taguig, Mandaluyong, and Makati before going all the way to Manila Bay. It also flows to other tributaries like the Marikina River and San Juan River. But in this network of waterways is a small, narrow river island that not a lot of people know is there: Isla de Convalecencia, which houses the 19th-century welfare institution Hospicio de San Jose. It can only be accessed via Ayala Bridge.

Hospicio de San Jose was established in 1782 through a 4,000-peso donation by Don Francisco Gomez Enriquez and his wife Doña Barbaza Verzosa. It was originally named Hospicio General in its location in Pandacan, where it first served the purpose of attending to the needs of the poor and abandoned in Manila. The Hospicio moved from one place to another: from Pandacan to Intramuros, to Binondo, to Nagtahan, and to Echague.

Finally in 1810, it found its permanent home in Isla de Convalecencia, which also has its own rich history. The river island in the district of San Miguel was originally called Isla de San Andres in honor of its owner Don Andres Blanco Vermudez. It first served as the site of two Spanish forts: Bastion de San Rafael and Bastion de San Andres. Don Andres later donated it to San Juan de Dios Hospital, which used the island as a recuperating place for their patients and thus named it Isla de Convalecencia. Hospicio General was later dedicated to Saint Joseph as their patron saint and was renamed Hospicio de San Jose.

After the change in address, Hospicio de San Jose also opened their doors for the confinement of mentally ill sailors, according to a 1988 research paper published in Ateneo de Manila's Philippine Studies. It served as the only mental asylum in the 19th century.

How Hospicio de San Jose Came to Be

In 1865, the Daughters of Charity of Saint Vincent de Paul took over the operations of the Hospicio upon the invititation of one of the benefactors, Doña Margarita Rojas de Ayala. By 1910, they housed orphans and the elderly in its more than 800 wards. It also served as a reform school for girls and boys, where they were taught livelihood skills. They also admitted abandoned babies.

During World War II, the Hospicio had to close and most of the buildings were burned and destroyed along with the rest of Manila. The institution recovered in the '70s and was officialy registered with the Securities and Exchange Commission and accredited by the Department of Social Welfare and Development.

Staying In Adventurer Savvy Seasoned Manila Hospicio De San Jose
Your Guide to Thriving in This Strange New World
Staying
In? What to watch, what to eat, and where to shop from home
OR
Heading
Out? What you need to know to stay safe when heading out