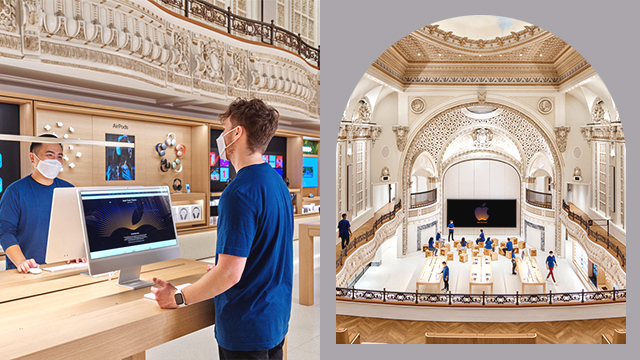 Apple Just Opened What Might Be Their Most Beautiful Store Yet

It's in Los Angeles.

Apple just opened their newest store at the historic Tower Theatre in downtown Los Angeles, and it is by far the brand's most beautiful store ever. Instead of demolishing the old building, Apple opted to undertake a colossal restoration project to keep the theater alive while injecting its own branding. The site has now been renamed the Apple Tower Theatre, and it's a feast for the eyes.

Built in 1927 in Baroque Revival style, the Tower Theatre was once the first ever theater in L.A. for films with sound, and was the center of cinema in the early days of the industry. A number of famous films have used the old theater as a filming location, such as Fight Club, CoyotE Ugly, The Prestige, and even Transformers. Despite its historical significance and status as a cultural monument, the theater became another victim of time and was abandoned for decades, until Apple stepped in to completely refurbish the building while adding its own touch.

Apple's renovations include a fully restored clock tower, recreated Broadway marquee, clean terra-cotta exterior, and renovated historic blade sign, but it's also added displays and tables for its latest Macs, iPhones, iPads, and other products. The company has also added the Forum, an area that will host Today at Apple, a series of daily talks with thought leaders and local creatives.

The new Apple Tower Theatre is certainly a site to behold, and one of the most unique tech shops in the world, where customers can enjoy Apple's latest products while stain glass windows, Corinthian columns, and chandeliers decorate the backdrop.

It might not be as big as Apple's Boylston Street Store, but no other Apple store is quite as grand as its latest L.A. location.

Check out the inside of the Apple Tower Theatre below:

Apple Apple Tower Theatre Los Angeles Savvy Seasoned Tpc-000001 Staying In Syndication Syn-00331
Your Guide to Thriving in This Strange New World
Staying
In? What to watch, what to eat, and where to shop from home
OR
Heading
Out? What you need to know to stay safe when heading out