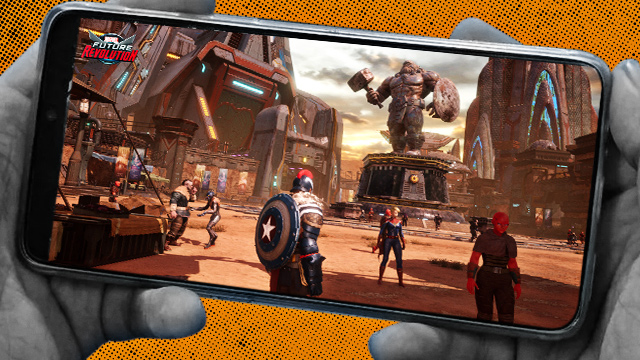 Marvel’s New, Free Mobile Game Is Here to Fill the Hole in the Hearts of MCU Fans

It comes with a brand-new storyline from one of Marvel's comic writers!

(SPOT.ph) It’s been a while since we saw half of the world return in Avengers: Endgame. It’ll be another year of waiting before we see the next Marvel movie, Black Panther: Wakanda Forever, in July 2022. The good news is, you can fill in the gauntlet-sized hole in your life with MARVEL Future Revolution, Marvel’s first-ever open-world action RPG for mobile devices, which is available for free on both App Store and Google Play starting today, June 30.

The Lowdown on MARVEL Future Revolution

The multiplayer mobile game features an all-new story written by Marvel comic writer Marc Sumerak, who’s written for Marvel Future Fight and Marvel Ultimate Alliance 3. It centers around the “Convergence,” where multiple realities from different universes collide. As a player, you get to choose among Marvel Super Heroes and join the New Stark City-based Omega Flight to save the universe.

At the start of the game, you can take your pick from Iron Man, Captain America, Captain Marvel, Spider-Man, Doctor Strange, Black Widow, Star-Lord, and X-Men’s Storm. You can even customize their looks and costumes—there are up to 400 million combinations for each hero!—before going on missions and battles.

The game includes variations of Marvel-famous locations like a Hydra-infested New York City, an Earth version of Asgard named Midgardia, the gladiator-filled desert of Sakaar, and more. The game also features different modes where you can play against another player or with a team of 10 players versus another team of 10. If that’s still not enough, 50 players can also fight against one big, super villain at a single time. As you level up, you’ll be able to unlock more multiplayer content like raids.

SPOT.ph got to chat with Danny Koo, Director of Product Development at Marvel, and Joe Lee, Executive Producer at Netmarble, about the game, the characters, the story, and what fans can expect.

You don’t have to worry if you’re not an expert at games—MARVEL Future Revolution is noob-friendly. Lee says, “We didn’t want this game to be for elite players only. We want this game to be a welcoming experience to the broader audience. If it has Marvel on it, that means we have to deal with fans all around the world, no matter [if] you’re a gamer or not.” One way they’re catering to beginners is through “Special Operations” mode a.k.a. their “fair mode” where players can just work on their skills before battling it out against other players. Lee adds that they’re “making sure that everything is intuitive and fun, intrinsically, as much as possible.”

You don’t have to be a diehard fan to appreciate the game’s details, either. Koo says, “We take inspiration and source materials from [the] comic[s]. We’ll pick the best location, best characters, best story, and we craft all-new experiences for players online. Whether you’re a fan of [the] comics, [or the] MCU, this game will be familiar, but very fresh and different.”

The game has something to offer both individual and team players. Lee says, “For this kind of a game, it’s very important that you don’t feel alone and that you’re always with somebody, together. But don’t worry—even for the lone wolves, it’s gonna be tons of fun.” You might also want to set up your Discord server with your friends because Koo says they’ve already seen a lot of fan activity popping up on the channel. “We’re happy that we are able to see such passionate fans awaiting this game.”

So, you’ve got the best of the best Marvel heroes battling it out with super villains in world-traversing locations in a brand-new story. All that’s left is a celebrity cameo or two. When asked about the possibility, Koo says, “I guess you’ll just have to play all the way through to find out.”

MARVEL Future Revolution is available for download for free on the App Store and Google Play.

Adventurer Savvy App Mobile Games Staying In Game App Tech Con-00263 Greener Gaming Marvel Future Revolution
Your Guide to Thriving in This Strange New World
Staying
In? What to watch, what to eat, and where to shop from home
OR
Heading
Out? What you need to know to stay safe when heading out