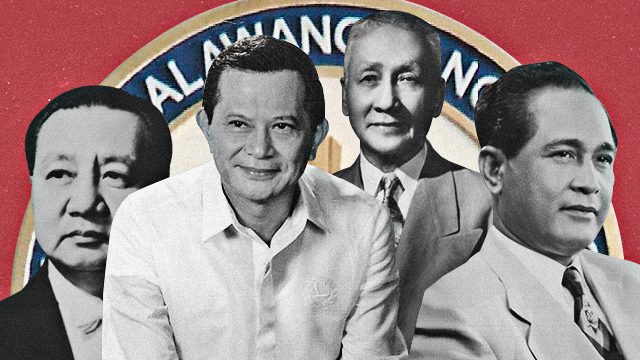 All the Past Philippine Vice Presidents and Their Biggest Contributions

There's not much, really.

(SPOT.ph) Current Philippine President Rodrigo Duterte expressed his intent to run as vice president in the 2022 national elections during the inauguration of the Light Rail Transit 2 East Extension Project on July 1. "Maybe at this time, you can say that maybe para to maintain the equilibrium sa lahat, consider me a candidate for the vice presidency at this time," he said. But he also explained that he would only pursue the position if House Majority Leader Martin Romualdez, who he promised to support, doesn't push through with his own bid for vice presidency.

Qualifications and Roles of the Vice President of the Philippines

According to the 1987 Constituion of the Republic of the Philippines, the vice president has the same qualifications as the President. An individual may become vice president if the following criteria are met: natural born Filipino, registered voter, must be able to read and write, 40 years of age at the day of the election, and must have resided in the Philippines 10 years before the election is held.

According to Article VII, Section 3 of the Constitution: "The Vice President may be appointed as a Member of the Cabinet. Such appointment requires no confirmation." Without a cabinet position, the vice president's only job is to remain on standby and serve the rest of the term "in case of death, permanent disability, removal from office, or resignation of the president."

In the past, vice presidents were given cabinet secretary positions, except in the case of Diosdado Macapagal, when he was vice president from 1957 to 1961. Incumbent Vice President Leni Robredo, on the other hand, was offered head of the Housing and Urban Development Coordinating Council on July 7, 2016. She accepted the position, but resigned on December 6 after she was directed to "desist from attending all Cabinet meetings," thus "effectively" making it impossible for her to do her job.

While Philippine vice presidents may or may not hold concurrent government positions, the U.S. vice president is constitutionally required to serve as the president of the Senate. This gives the elected vice president not only a position in the executive branch, but also in the legislative branch of the U.S. federal government. The American vice president has the power to preside over Senate deliberations, but is not allowed to vote except to break a tie. They also automatically become a member of the National Security Council, giving them a significant role in security-related policy-making

On the website of the Office of the Vice President, the following mandate is declared by Robredo's administration: "As the second highest office in the land committed to the service of the nation, the Office of the Vice President performs executive, ceremonial, and advocacy functions, collaborating with stakeholders and organizations in both the public and private sectors, to develop and promote programs that uplift the lives of the Filipino people." This mandate, as well as the mission and vision, changes depending on whoever's sitting as vice president. Her office also lists these core functions that are beyond what's stated in the constitution:

To adhere to these self-initiated commitments despite not having a cabinet position that comes with a budget, the current Office of the Vice President (OVP) focuses on the Angat Buhay: Partnerships Against Poverty project. Launched in October 2016, it "aims to bring together the public and the private sectors—organizations and individuals alike—to address the needs of families in the farthest and the poorest communities in the country." It has so far partnered with 330 organizations and mobilized more than P400 million worth of resources for the benefit of more than 300,000 families and more than 220,000 individuals, according to the OVP website.

Past Vice Presidents of the Philippines

First Visayan Vice President Sergio Osmeña served alongside President Manuel L. Quezon, who was his running mate from the Nacionalista party. He was also the first secretary of Public Instruction (now Department of Education), which was a position he held for three years. Following changes in the government structure during the occupation of the Japanese, he became Secretary of Public Instruction, Health, and Public Welfare for the rest of his vice presidency.

Upon the death of Quezon, who was also then serving his second term, Osmeña became president of the Commonwealth from 1944 to 1946.

After the reconstitution of the Commonwealth Government in 1945, Elpidio Quirino ran alongside Manuel Roxas, and the tandem won the election. He concurrently served as the Foreign Affairs secretary, a position he held for an extended two years when he was already president.

During the ratification of the Treaty of General Relations between the Philippines and the United States on October 22, 1946, Quirino asserted the Philippines' position as an equal "rather than guardian and ward." His press statement also said: "Although we are a small nation and the United States is a great and powerful one—one of the greatest on the earth—we have every reason to believe and to expect that we will be regarded as a nation on an equal footing with all the great and small nations of the world."

Lopez was Secretary of Agriculture and Natural Resources from 1950 to 1953, then again from 1965 to 1971. During his first term, the Bureau of Agricultural Extension (now Agricultural Training Institute) was established. In 1968, he implemented a production program that enabled the Philippines to export rice.

Ramón Magsaysay's running mate, Carlos P. Garcia was appointed Secretary of Foreign Affairs while serving as Vice President of the Philippines. During his term, the Philippine Embassy in Tokyo and Consulate in Kobe opened in 1956, five years after the Philippines and Japan signed the San Francisco Treat to end the state of war between the two nations. He took his oath as president a day after Magsaysay passed away due to a plane crash.

Unlike previous president-vice president tandems, Diosdado Macapagal—a Liberal—was the first vice president who came from the rival party of the president (then Carlos P. Garcia from the Nacionalista). He wasn't given a cabinet position, and instead made frequent trips to different regions to get to know the Filipino people. Macapagal challenged Garcia's bid for another presidential term and won by a landslide vote.

Vice President Emmanuel Pelaez served as Foreign Affairs Secreary until 1963, when he resigned from the post. During his term, the president gave him "power of authority" to "formally accept for the Republic of the Philippines, the cession or transfer of sovereignty over the territory of North Borneo by His Highness Sultan Mohammad Esmail Kiram, Sultan of Sulu."

Salvador Laurel served as Foreign Minister from 1986 to 1987 during his term as vice president under former President Corazon Aquino. He was also appointed as Prime Minister, a position recreated during the Marcos administration only to be abolished again with the release of Proclamation No. 3 in the 1987 Constitution.

As Foreign Affairs Secretary, he "streamlined his policy to gain recognition from other states in order for economic assistance to come in," according to his website. Economic aid came in with U.S. leading the pack, providing millions of dollars of economic and military assistance. He went on official trips to Japan, Canada, Australia, Singapore, Brunei, New Zealand, Korea, Germany, France, Spain, and Finland—which all pledged aid to the country. The Philippines was also able to host the ASEAN Summit Convention in 1987 despite political turmoil in the country.

During Fidel V. Ramos' presidency, he created the Presidential Anti-Crime Commission, which "was established with the principal task of directing and coordinating the activities of various law enforcement agencies to effect a more vigorous campaign against criminality." Vice President Estrada served as the Commission's chairman from 1992 to 1997, when criminals were paraded before cameras on national television and special units were created to raid safehouses.

During then-President Estarada's term, Vice President Gloria Macapagal Arroyo was appointed Social Welfare and Development Secretary, a position she held until she resigned from the cabinet in 2000. The president also issued Executive Order No. 15 for "Redirecting the Functions and Operations of the Department of Social Welfare and Development," giving Arroyo's cabinet office specific mandates and roles. The order effectively "transformed [the Department] from a direct service deliverer to a technical assistance provider as a result of the devolution of basic services to the local government units."

Since there was no election between the Estrada and Arroyo administrations, Teofisto Guingona became the only appointed vice president. He was Secretary of Foreign Affairs until he resigned from the post after a year.

In 2009, De Castro was investigated in a Senate hearing that questioned his presence in a Pag-IBIG Fund infomercial. It was part of an aggresive advertising campaign for the agency's new housing loan program. There was also an issue a few months after his term, when news broke about the P6.6-billion housing scam involving Pag-IBIG Fund and Globe Asiatique.

Philippines Duterte Vice President Adventurer Savvy Seasoned
Your Guide to Thriving in This Strange New World
Staying
In? What to watch, what to eat, and where to shop from home
OR
Heading
Out? What you need to know to stay safe when heading out