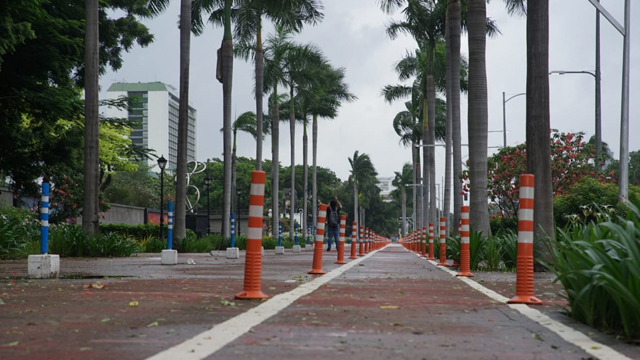 It has plastic bollards.

(SPOT.ph) The lack of efficient public transportation in Metro Manila, especially during the pandemic, pushed a lot of commuters to use the bicycle in getting from one point to another. It's not easy though, especially when you have car owners who don't respect bike users or bike lanes that don't have delineators. In an effort to ensure our bikers' safety, the Department of Transportation officially opened the Metro Manila Bike Lane Network—"the country’s longest bike lane network to date" according to them.

The bike lane has an overall length of 313 kilometers and passes through 12 cities: Pasig, Marikina, Quezon City, Caloocan, Manila, San Juan, Mandaluyong, Makati, Pasay, Las Piñas, Parañaque, and Taguig. Depending on the road, the lanes' measurement range from 1.5 to 3 meters. The Metro Manila Bike Lane Network is part of the 497-kilometer bike lane that also includes Metro Cebu and Metro Davao.

According to a statement by the Department of Transportation, the lanes use concrete delineators and flexible rubber bollards to separate the bikers from motor vehicles. Some lanes have white-and-green pavement markings, bike symbols and signage, and solar-powered road studs. Bike racks have also been installed all over the Metro.

Bikes Biking Metro Manila City Life Infrastructure Heading Out Manila Hyperlocal Adventurer Savvy Seasoned Dotr Department Of Transportation Hard News
Your Guide to Thriving in This Strange New World
Staying
In? What to watch, what to eat, and where to shop from home
OR
Heading
Out? What you need to know to stay safe when heading out