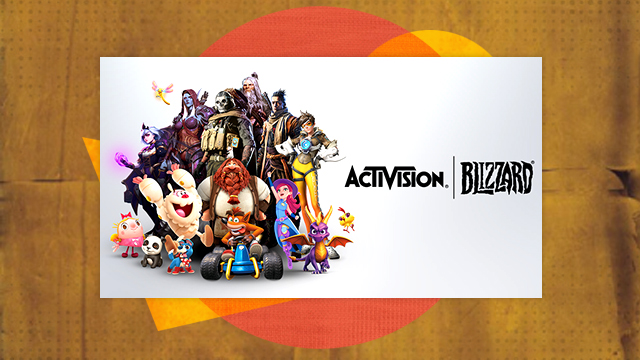 The company behind games like Diablo, WarCraft, and Call of Duty is under fire.

(SPOT.ph) They made games during the '90s that became household names to this day. Now, they'll need to defend themselves in court. On July 20, the state of California filed a lawsuit against Activision Blizzard, the maker of games such as Diablo, WarCraft, StarCraft, Overwatch, and Call of Duty, to name a few. The lawsuit alleges a disturbing culture of sexual harassment and discrimination in the company’s workplace. It was filed by the Department of Fair Employment and Housing, the largest civil state rights agency in the United States. The Department of Fair Employment and Housing (DEFH) has filed the complaint on behalf of aggrieved female employees after a two-year investigation.

Activision Blizzard is one of the largest game companies in the world with over 9,500 employees and multiple subsidiaries. In 2020, the company earned a revenue of U.S. $8.09 billion, and according to Statista, their games were accessed by 127 million monthly active users in the second quarter of 2021. Being such an established gaming company, news of the lawsuit has sent shockwaves in the industry. Only 20% of its workforce is female and most of its top executives are male and white.

The list of alleged offenses in the lawsuit are quite damning. In a Bloomberg Law report, it was said that female employees are subjected to a workplace culture that was similar to a “frat house” where male employees were often drunk or skipping work just to play games. Male workers would allegedly engage in “cube crawls” where they would get to work hungover and visit other female coworkers in their work areas to make lewd remarks. These errant employees have also reportedly harassed the women in the form of sexual comments on their bodies, rape jokes, and unwanted physical contact and groping. Even supervisors and executives have allegedly engaged in similar behavior. The employees have been reported to the HR department but they were either met with inaction or the erring executive was only given a verbal reprimand by other executives.

The suit details the different types of discriminatory practices in the company. Women were given unequal pay, assigned to lower positions, and denied promotions and a higher rank. Underqualified male employees got promoted first and some were even paid more than the women who did more work. Pregnant employees and African-American female employees were treated differently. The company’s former Chief Technology Officer was also said to make hiring decisions based on the applicant’s looks and was seen groping female employees at parties.

While the outside world was unaware of these horrendous workplace conditions at Activision Blizzard, there were already glimpses of this toxic bro culture.

The Toxic Bro Culture at the Company Behind WarCraft

In a World of WarCraft panel at BlizzCon 2010, a female gamer who goes by the name of Xantia was asking the all-male panel a question about the apparent disconnect between creating a strong female character but giving her the outfit from a Victoria’s Secret catalog. Instead of giving her a serious answer, members of the panel tried to make a joke out of her question.

Three days after the suit was filed, Activision Blizzard CEO Bobby Kotick released his own statement to employees in an e-mail dated July 27. He apologized for the company’s early responses calling them “tone deaf” and promised to immediately implement remedial measures such as employee support, listening sessions, changes in personnel, fair hiring practices, and change in in-game content.

Mike Morhaime, a Blizzard co-founder and former company president, released a statement on July 24 in the wake of the allegations. He left the company in 2019 after spending almost three decades at Blizzard. He said that he found the allegations to be difficult and disturbing, and was also ashamed about everything that had happened. In his statement, he apologized and said, “I realize that these are just words, but I wanted to acknowledge the women who had awful experiences. I hear you, I believe you, and I am so sorry to have let you down.”

Employees and the #ActiBlizzWalkout

Activision Blizzard employees staged a walkout on July 28 to protest the company’s culture of harassment and discrimination. Eight hundred employees released a letter that condemned the leadership in the company. In the letter, employees have declared “company executives have claimed that actions will be taken to protect us, but in the face of legal action—and the troubling official responses that followed—we no longer trust that our leaders will place employee safety above their own interests.” Employees used the hashtag #ActiBlizzWalkout on Twitter.

In the wake of the allegations, 500 employees of Ubisoft, another leading game development company that has been plagued with similar issues in the workplace, have released a letter expressing their support for workers at Activision Blizzard while calling for industry wide change. News website Axios published the letter in full on July 29.

As a sign of more sweeping changes within Activision Blizzard, the company has announced the resignation of its president J. Allen Brack on August 3. He will be replaced by Jen Oneal, a female executive VP of development and Mike Ybarra, a former Xbox executive who joined the company in 2019.

Adventurer Savvy Seasoned Staying In Con-00263 Tech Greener Activision Blizzard Short History Call Of Duty Gaming
Your Guide to Thriving in This Strange New World
Staying
In? What to watch, what to eat, and where to shop from home
OR
Heading
Out? What you need to know to stay safe when heading out