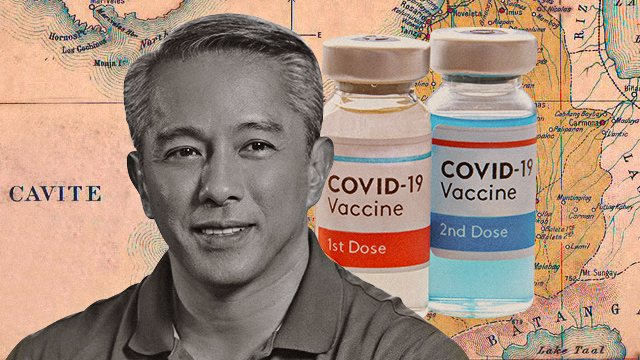 The response is "worse" than noted, he said.

(SPOT.ph) It looks like vaccine inequality isn't only a global problem, but a national issue, too. Cavite Governor Jonvic Remulla expressed concerns over disparity in vaccine supply Metro Manila versus neighboring provinces. And in a tweet on August 26, Thursday, it looks like he has enough.

"I am already BEYOND frustrated. Naka-ilang meeting na pero everytime we ask for vaccine support the answer is 'we will get back to you.' Puro ganyan. It is worse than 'noted,'" he said. Remulla expressed the same exasperation during an earlier interview on Super Radyo dzBB: "Ang sinasabi nila [national government] 'we will get back to you, may supply na darating.' Very frustrating ang situation."

While thankful for the one million doses of COVID-19 vaccines delivered to the province and that 500,000 people are already vaccinated, the Cavite governor argued that they need at least six million doses to achieve herd immunity. They are also capable of administering up to 60,000 doses a day, but the lack of vaccine supply is hampering their vaccination drive.

Cavite has a budget of P2.5 billion for their vaccination program, but the arrival of Novavax—the COVID-19 vaccine brand that they've procured—is postponed yet again to the fourth quarter of 2021, he explained.

He also told his constituents: "Only the national government has sole authority and control over vaccine order and distribution. The LGU's hands are tied as they are prohibited and blocked from making their own choice of procurement. We can only buy via the tripartite agreement but our order remains unsigned. This tripartite agreement on vaccine procurement by the LGU is the national policy whether we like it or not."

In an earlier post, Remulla also asked the Department of Health to give appropriate attention to Region 4-A, which Cavite is part of.

Cavite Hyperlocal News Covid-19 News Hard News Advenurer Savvy Seasoned Staying In
Your Guide to Thriving in This Strange New World
Staying
In? What to watch, what to eat, and where to shop from home
OR
Heading
Out? What you need to know to stay safe when heading out