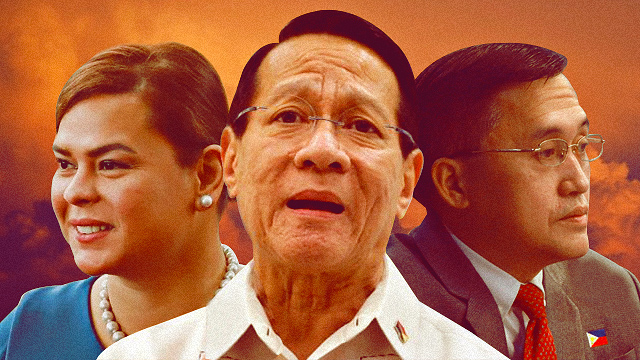 All the Teleserye-Worthy Lines We've Heard in the News Lately

Believe it or not, they're for real.

(SPOT.ph) There's a reason that Philippine politics is sometimes compared to a circus. We hear a lot of mental gymnastics, we see the most spectacular illusions, and we witness well-practiced posturing. In recent weeks, the news reports and quotable quotes being thrown around by government officials seem to blur the lines between real life and teleseryes. The difference is that their tirades, which range from bouts of self-pity to cringeworthy expression of love, actually affect our lives.

Here's a quick rundown of the most teleserye-worthy lines that have made the news lately:

In a privilege speech at the senate on August 31, Senator Bong Go gave his defense "against malicious intrigues and innuendos implied by some groups and even a few from [the] Chamber." He decried allegations linking him to anomalies related to the procurement of reportedly overpriced medical goods through former Department of Budget and Management-Procurement Service head Lloyd Christopher Lao. Go, who worked as President Rodrigo Duterte's aide from 2016 to 2018, is allegedly involved because of his closeness and proximity to the president even when he's already serving as a senator.

Following the Commission on Audit's crackdown on the alleged misuse and unsed P67 billion worth of funds by the Department of Health, Health Secretary Francisco Duque III got emotional during a virtual hearing on August 17.

He said that his agency was receiving "unfair and unjust" treatment, and that the Audit agency should have considered that they're not operating under normal circumstances.

"I refuse to be a political punching bag for a party in complete disarray."

After conflict emerged within the ruling party PDP-Laban, Davao City Mayor Sara Duterte-Carpio released a statement on August 25 saying that her father confirmed to her personally his decision to run as vice president in 2022 alongside long-time aide Go as president. "It was not a pleasant event," she said as she was presented with two options: to endorse the tandem or run as president alongside Go as vice president.

Duterte-Carpio also urged Senator Koko Pimentel and Ronwald Munsayac to "stop blaming [her] for the sad state of their political party."

"My advice to you is to lose weight"

Something you probably never thought you'd hear in a presidential address: "lose weight" and "your hairdo is strange." But it happened.

During Duterte's recorded speech televised on August 31, the president particularly eyed Senators Richard Gordon and Panfilo Lacson. "My advice to you is to lose weight so that.... I get dizzy when I look at you. It’s true, even your hairdo is strange, both you and Ping," he said. Gordon is heading the Blue Ribbon Committee that's investigating the questionable purchase of medical supplies and equipment by the Department of Health.

News Adventurer Savvy Seasoned Francisco Duque Sara Duterte Bong Go
Your Guide to Thriving in This Strange New World
Staying
In? What to watch, what to eat, and where to shop from home
OR
Heading
Out? What you need to know to stay safe when heading out