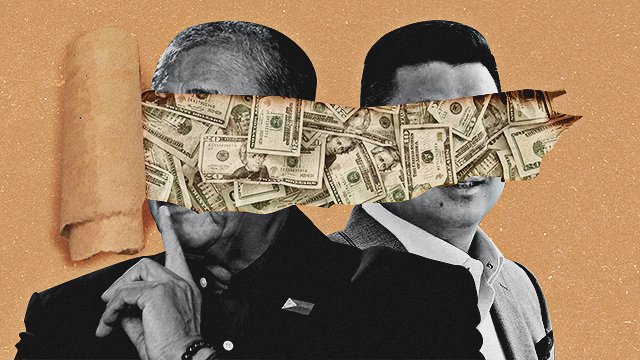 (SPOT.ph) A lot has been written about the world's one percent, a percentage of people said to have the most money, property, and power. It is a reflection of the growing wealth gap between the elite compared to the rest of humanity walking this Earth. And in an "unprecedented leak" of millions of financial documents, it is revealed just how much some current and former world leaders, politicians, fugitives, con artists, and murderers are hoarding the world's riches—without a trace. These secret records, known as Pandora Papers, came from 14 offshore services firms that helped clients "keep their financial activities in the shadows." After two years of research—from "tracking down hard-to-find sources to digging into court records and other public documents," the leaked documents are exposed and published by the International Consortium of Investigative Journalists through a team of more than 600 journalists from 150 news outlets in 117 countries on October 4, 1 a.m.

These kinds of offshore services firms set up shell companies and offshore accounts to make sure that purchases, including the money used, are hard to trace in public documents. "The Pandora Papers investigation provides an unequaled perspective on how money and power operate in the 21st century—and how the rule of law has been bent and broken around the world by a system of financial secrecy enabled by the U.S. and other wealthy nations," according to the International Consortium of Investigative Journalists (ICIJ).

Some of the most notable hidden treasures revealed in the documents are a U.S. $22 million chateau in the French Riviera purchased through offshore companies by Czech Republic prime minister Andrej Babis, more than U.S. $13 million tucked in a "secrecy-shaded trust" by one of Guatemala's most powerful families, and U.S. $68 million beachfront mansions in Malibu purchased through three offshore companies by the King of Jordan during the Arab Spring protests.

The Philippine Center for Investigative Journalism and Rappler, as part of ICIJ, published a list of more than 35 Filipino politicians, contractors, bankers, and business professionals from the Pandora Papers. These profiles are based on "a cache of leaked documents from offshore service providers, namely, Trident Trust, Commence Overseas Limited, Overseas Management Company Trust Limited, Asiaciti Trust, and Alcogal." More than 940 individuals and companies with Philippine addresses were found. "There are legitimate uses of offshore companies, and we do not intend to imply that all of the individuals or companies included in this page were in violation of the law," PCIJ said as a disclaimer. The media outlets also sent requests for comments to people profiled in their list, and the answers they received are included in the profiles.

Here are the Filipino government officials listed in the Pandora Papers:

According to PCIJ, Secretary Arthur P. Tugade and his children appear "in Trident Trust records as beneficial owners of Solart Holdings Limited," which has been operating since 2007. In the report, it was said that the British Virgin Islands company was created for the income of the Tugade's family's businesses under Perry’s Group of Companies, which has an asset worth U.S. $1.5. million (P75 million). "The offshore entity is nowhere to be found in his yearly Statement of Assets, Liabilities and Net Worth," based on PCIJ's reports. The Statement of Assets, Liabilities and Net Worth (SALN) is required of all public officials. Before serving as transport chief, Tugade was the president and chief executive officer of Clark Development Corporation, which is part of the government-owned Bases Conversion and Development Authority, from 2012 to 2016.

Chinese-Filipino businessman Dennis Uy, who is a native of Davao City, is the founder of Udenna Corporation. The holdings company has businesses in oil and gas, shipping and logistics, real estate, telecommunications, food, and infrastructure, among others. Accordng to Pandora Papers, Uy "appears in Commence Overseas Limited records as the beneficial owner of China Shipbuilding and Exports Corporation, a British Virgin Islands (BVI) company registered in 2016," the "director of Pacific Rider Limited in Overseas Management Company Trust Limited records," and "a stockholder of Apex Mining Co. Inc."

Uy is known to have donated P30 million to President Rodrigo Duterte's campaign in 2016. He is also appointed as the presidential adviser for sports.