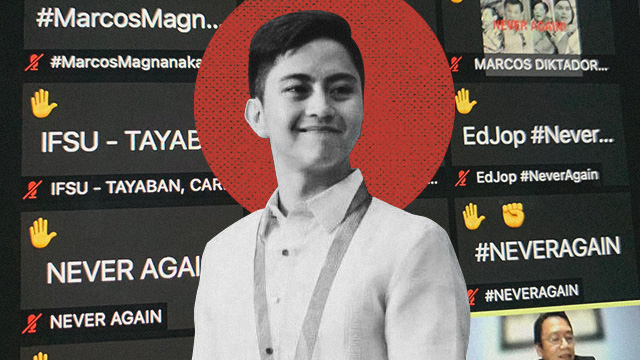 There was also a reference to killed student activist Archimedes Trajano.

(SPOT.ph) Misinformation and disinformation about late dictator Ferdinand Marcos and Martial Law are now rampant on social media. But there are still Filipino students who are well aware of the court-ruled ill-gotten wealth of the Marcos family, first-hand narratives of torture and forced disappearances of dissidents, and economic crisis during the '70s. And on October 5, youth groups exercised their right to protest and free speech during a virtual student congress organized by the Commission on Higher Education - Cordillera Administrative Region. Attendees logged on to a talk titled "Redefining the Role of Youth in Nation Building," which is presented by Ferdinand Alexander A. Marcos III (a.k.a. Sandro)—grandson of the former dictator and son of former Senator Bongbong Marcos.

Also read: The Way It Was: Martial Law and Torture Under the Marcos Regime

Akbayan Youth Chairperson Dr. RJ Naguit in a tweet showed that attendees of the virtual event renamed their profile with the hashtags #NeverAgain or #NeverForget, a battlecry that reminds Filipinos about the truth during the dictatorship.

One of them also changed their name to Archimedes Trajano, a student activist during the Marcos' Martial Law regime. The 21-year-old Mapua student asked the dictator's daughter, Imee Marcos, during a forum at the Pamantasang Lungsod ng Maynila in 1977, "Must the Kabataang Barangay be headed by the president’s daughter?” That was the last time he was seen alive.

The District Court of Honolulu, Hawaii found Imee civilly liable for the "wrongful death of deceased Archimedes Trajano committed by military intelligence officials of the Philippines allegedly under the command, direction, authority, supervision, tolerance, sufferance and/or influence of defendant (Imee Marcos) pursuant to the provisions of Rule 39 of the then Revised Rules of Court." She was ordered to pay the Trajano family U.S. $4.16 million in damages and attorneys fees.

Since this was a judgment by a foreign court, Trajano's mother had to go to the Pasig Regional Trial Court to enforce the ruling. Imee reportedly lived in a condominium in Pasig. The local court in 1993 served the summons, but Marcos' daughter wasn't there at the time, arguing that she's already a resident of Singapore. Instead, the caretaker of the condominium unit received the summons. This was later ruled by the Supreme Court of the Philippines in 2006 as reason to void the court's enforcement of the payment.

The Commission on Higher Education already drew flak earlier for initially using "Hon." in Sandro's honorific style. "Hon." or honorable is traditionally used in the Philippines to address elected and appointed government officials and members of the judiciary. The Marcos scion's profile on the Student Congress poster says "House Majority Leader Staff Assistant." The publicity material was later deleted and changed with a new one that uses "Mr." instead of "Hon."