COMELEC Probes Illegal Use of NTC Text Alert for BBM Campaign
Loading
Already a member? Log in
No account yet? Create Account
Spot.ph is your one-stop urban lifestyle guide to the best of Manila. 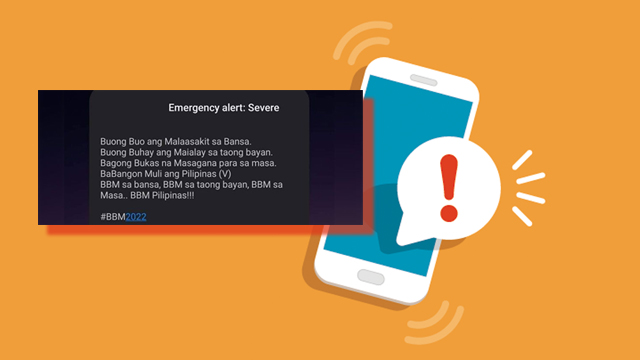 COMELEC Vows to Hold Accountable Those Behind BBM Emergency Alert

(SPOT.ph) The Commission on Elections on Saturday, October 9, promised to hold accountable those behind the use of the Philippines' Emergency Cell Broadcast System to promote Bongbong Marcos' bid for presidency.

People reported on Wednesday morning, October 6, that their phones rang with an "Emergency Alert: Severe" notification. This is similar to the country's disaster alert system for heavy rains, flood warning, and earthquake, facilitated by the National Disaster Risk Reduction and Management Council.

"Big no! Ours go through the telcos. They will surely not accept that from us. We are allowed only by RA 10639 to send alert messages on impending hazards," said Undersecretary Ricardo Jalad, executive director of the NDRRMC.

Republic Act 10639, also known as the Free Mobile Disaster Alerts Act, mandates phone service providers to send out alerts "in the event of an impending tropical storm, typhoon, tsunami, or other calamities." This was signed into law on June 20, 2014 by former president Benigno Aquino III, while implementing rules and regulations were released on July 21, 2015. Text alerts were initially used for the system, until the NDRRMC's Emergency Cell Broadcast System was launched on March 13, 2017.

The National Telecommunications Commission is also looking into the incident. The telcos reported that the alert system did not originate from their networks and that there was no request coming from the NDRRMC.

“We are conducting an investigation. If this is not from the telco networks, we suspect that the message came from portable cell sites, which are exclusive for the use of NDRRMC and its approved agencies," NTC Deputy Commissioner Edgardo V. Cabarios told Business Mirror in a phone interview.

Marcos' camp also denied any involvement in what happened.

"The illegal use of the emergency blast was done at a time when Bongbong Marcos was filing his Certificate of Candidacy and is viewed as among the many demolition jobs unleashed by those who want to frustrate his candidacy," said Atty. Vic Rodriguez, Marcos’ lawyer and chief of staff.

Jimenez on Saturday said that even if the text alert was found to have come from a candidate's camp, it's still not ground for disqualification.