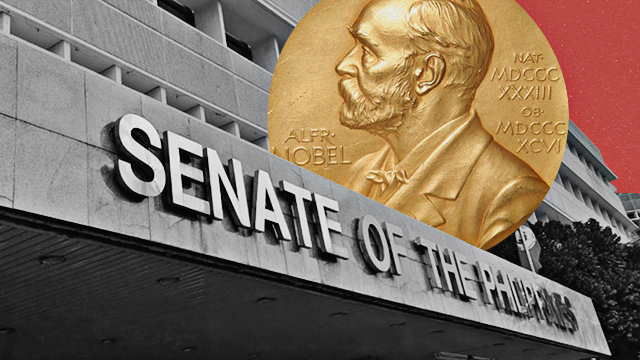 There's a Senate Medal for Nobel Prize Winners, But It's Now Up for Debate

Senator Juan Miguel Zubiri said there still needs to be a unanimous vote.

(SPOT.ph) Filipino journalist and Rappler co-founder Maria Ressa was conferred the Nobel Peace Prize by the Norwegian Nobel Committee on October 8. This means that she should be given the Philippine Senate Medal of Excellence, but this is apparently up for debate at the Upper House according to a report by the Philippine Daily Inquirer.

Also read: The First Filipino To Get a Nobel Prize Is a Female Journalist

The Senate of the Philippines on August 23 unanimously approved the creation of the Philippine Senate Medal of Excellence, which—according to Resolution No. 110—is "conferred upon Filipinos who are awarded the Nobel Prize, Pulitzer Prize, the A.M. Turing Award, the Ramon Magsaysay Award, or an Olympic medal." Recipients of the five international awards, according to a press release from the 18th Congress, are "automatically qualified to receive the Senate Medal of Excellence." The resolution was introduced by Senators Francis Tolentino, Juan Miguel Zubiri, and Juan Edgardo Angara; and signed by Senate President Vicente C. Sotto III. It was first conferred to Olympic medalists Hidilyn Diaz, Carlo Paalam, Nesthy Petecio, and Eumir Marcial on September 6.

As for Ressa's conferment, it’s “automatic per [the resolution]. Debates will also confirm my interpretation,” according to Minority Leader Franklin Drilon in the Philippine Daily Inquirer report. But Zubiri insisted that matter still requires a unanimous vote.

“We can take this up when we get back in November. [The conferment on Nobel winners] should have been automatic; however, there is a Drilon amendment that states it’s upon the unanimous vote of all members, so if nobody objects then it is automatic. That’s in the approved rules,” Zubiri, the Majority Leader, said.

Zubiri and Sotto were referring to the last amendment on page three of the resolution, "To confer the Philippine Senate Medal of Excellence to such other Filipinos and Philippine institutions upon the unanimous vote of the members of the chamber." Depending on their interpretation, the clause "other Filipinos and Philippine instiutions" may or may not mean the other awardees aside from the recipients of the international awards previously mentioned on page two of the document.

Ressa was awarded the Nobel Peace Prize "for [her] efforts to safeguard freedom of expression, which is a precondition for democracy and lasting peace." Norwegian Nobel Comittee chair Berit Reiss-Andersen said that the journalist "uses freedom of expression to expose abuse of power, use of violence, and growing authoritarianism in her native country, the Philippines." Her citation also applauded Rappler's "critical attention to the Duterte regime's controversial, murderous anti-drug campaign."

Also read: Media Is "One of Last Lines of Defense" Against Fake News, Says Risa Hontiveros

This recognition in the international stage shone a light on the government's attacks on Filipino journalists, including the legal battles of Rappler and disenfranchisement of ABS-CBN.

“It does place the Duterte administration in a very awkward situation considering how it has repeatedly attacked Rappler and filed all sorts of bogus cases against her,” Senator Francis Pangilinan said in the same report.