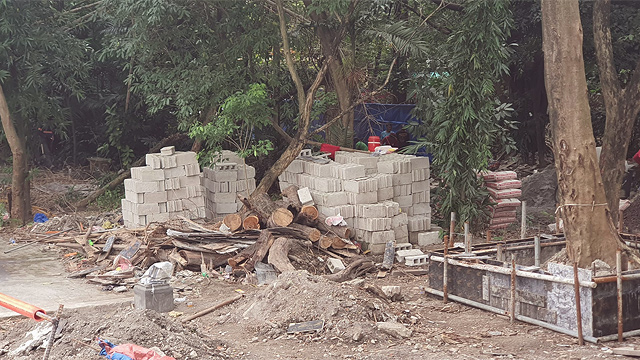 The non-native plants, for one, will be removed.

(SPOT.ph) After seeing for themselves the damage that's been done to Arroceros Forest Park on November 12, the Save Arroceros Movement met with Manila Mayor Isko Moreno on Monday morning, November 22. Their foremost complaint was "the lack of consultation with concerned environmental organizations and partners as mandated by Manila Ordinance 8607." And there was the big question of how the ongoing construction—one that negatively affected the park's biodiversity—was greenlit in the first place. As the group noted, the "layout of the newly cemented portions of the park resulted in missing trees, removal of the thriving undergrowth beneath the existing trees stopped natural regeneration, and ongoing construction also resulted in loss of birds, insects, and other animals which have made the forest park their home."

To make sure that expectations and reality are aligned this time, members of the Save Arroceros Movement (SAM) and Moreno held the meeting right in Arroceros Forest Park.

The following points for the development, or redevelopment, of Arroceros Forest Park were agreed by both parties:

The Arroceros Forest Park is known as the "last lung of Manila." It is a fenced forest park that houses at least 60 indigenous tree varieties, 8,000 plants, and 10 bird species—at least when it was established in the '90s.

Winner Foundation, which is actively part of SAM, is a civic organization that established the forest park in 1993. Back then, they collaborated with the local government of Manila to start a greening project. Former Manila Mayor Alfredo Lim and then first lady Amelita Ramos were on board, securing for them a 2.2-hectare lot that was vacated by what was then the Department of Education, Culture, and Sports. The property belongs to the national government but its title is under the City of Manila.

After fundraising activities and herculean efforts by volunteers, around 3,500 trees were planted in the area in addition to the 150 centuries-old trees, which were all idenfitied and labeled through the help of forestry experts. Most of the trees at the Arroceros Forest Park are endemic. Keeping them in the forest was part of the effort to ensure that some of our native flora and fauna thrive for as long as possible.

After Lim's administration, succeeding Manila mayors continously threatened the existence of Arroceros. When former Mayor Lito Atienza took over, up to 3,000 trees were cut down to make way for buildings for the city school division and a teacher's dormitory. Former Mayor Joseph Estrada's administration proposed a school gymnasium for the University of Manila built in the area; fortunately, that plan was stopped.

When Moreno led the groundbreaking ceremony on September 8 for the redevelopment of the Arroceros Forest Park in September, concerned citizens had mixed feelings about it. The mayor said that the park will have amenities like play areas, kiosks, public toilets, elevated path walk, and water fountains.

On September 12, members of the Save Arroceros Movement found a completely different Arroceros Forest Park—one that's more of a park than a forest.

All photos used with permission from Chiqui Sy-Quia Mabanta of Winner Foundation for SPOT.ph.

Arroceros Forest Park Manila Hyperlocal Save Arroceros Movement Environment Heading Out Adventurer Savvy Seasoned Isko Moreno
Your Guide to Thriving in This Strange New World
Staying
In? What to watch, what to eat, and where to shop from home
OR
Heading
Out? What you need to know to stay safe when heading out