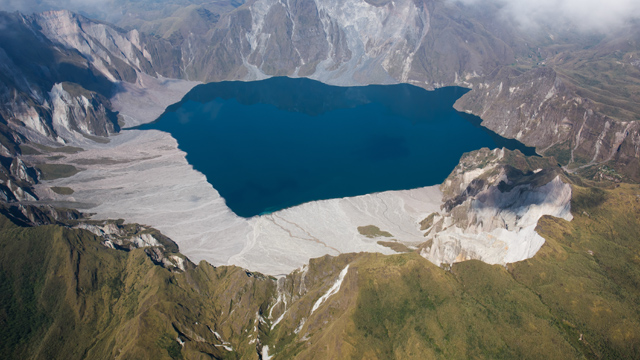 In a Nutshell: What You Need to Know About Pinatubo's "Weak Explosion"

Its Alert Level 0 is under consideration.

(SPOT.ph) As people are either taking some much-needed rest or binge-watching their favorite show on a holiday, news broke on Tuesday, November 30, that a phreatic eruption occurred at Mount Pinatubo's crater between 12:09 p.m. and 12:13 p.m. This confirmation by Philippine Institute of Volcanology and Seismology on their last update at 6 p.m. came after "visual reports of an eruption plume and seismic, infrasound and satellite detection."

Here's everything you need to know if you missed today's news about Mount Pinatubo eruption:

As of 6 p.m., Pinatubo's Alert Level 0 status is under consideration. Based on the Philippine Institute of Volcanology and Seismology (PHIVOLCS) Volcano Alert Level Scheme, Alert Level 0 means that volcanic earthquakes are typically less than a day and the CO2 flux at Pinatubo's caldera lake remains below 1,000 tonnes a day. Based on these parameters, there are no major eruption in the foreseeable future, but communities at risk must always be prepared.

PHIVOLCSs said that there has  been no ashfall reported from communities in Zambales, where the eruption plume dispersed. They also explained that the phreatic or steam-driven eruption was "likely driven by shallow hydrothermal processes beneath the edifice." This conclusion is based on observations of "very low seismic activity in the volcano in the past days," "low diffuse volcanic CO2 flux" measured at Pinatubo Lake, and "high infrasound over seismic energy" during the eruption.

Phreatic eruptions occur when water beneath the ground or on the surface is heated by magma, lava, hot rocks, or new volcanic deposits. Because of intense heat, the underground water begins to boil and turns to steam. This generates an explosion of steam, water, ash, and blocks—though not necessarily all these elements.

If you still remember, Taal Volcano had a phreatic explosion on January 12,2020 which generated a spew of ash that reached parts of Metro Manila. While today's phreatic eruption of Mount Pinatubo was not as strong, PHIVOLCS still advise local government units to prohibit entry into Pinatubo Crater "as shallow phreatic or hydrothermal explosions such as the event of today can occur without warning."

Mount Pinatubo is an active stratovolcano straddling the provinces of Zambales, Tarlac, and Pampanga. It was pretty chill, at least until week-long seismic activity that eventually led to the nine-hour eruption on June 15, 1991. The volcanic activity was so massive that it permanently changed the topography in that area, including the collapse of the stratovolcano inward and into the depleted magma chamber underground. This 2.5-kilometer wide caldera eventually filled with water coming from spring discharge from its walls, mountain runoff, and rainwater; it's now what we know as Pinatubo Lake.

Around the volcano, agricultural lands and residential areas were placed under a blanket of ash, tephra fallout, and pyroclastic flow deposit. It didn't help that the second largest volcanic erupton of the 20th century occurred side-by-side as a strong tropical cyclone named Typhoon Diding (Yunya). Thick ash quickly turned to rampaging lahar floods, damaging everything on its way—from houses to churches, from major rivers with rich ecosystems to agricultural lands. More than 800 people were killed, 1.5 billion pesos worth of agricultural damage, more than 8,000 houses were destroryed, around 73,000 homes were damaged, and several important river systems were clogged with sediment.

Nothing as massive has occurred at Mount Pinatubo since. Before today, Mount Pinatubo was at Alert Level 1 beginning March 4, but was again downgraded to Alert Level 0 on August 11. PHIVOLCS is closely monitoring the volcano’s current status, and any new development is yet to be announced.

Hard News News Mount Pinatubo Eruption Zambales Staying In Seasoned Savvy Adventurer
Your Guide to Thriving in This Strange New World
Staying
In? What to watch, what to eat, and where to shop from home
OR
Heading
Out? What you need to know to stay safe when heading out