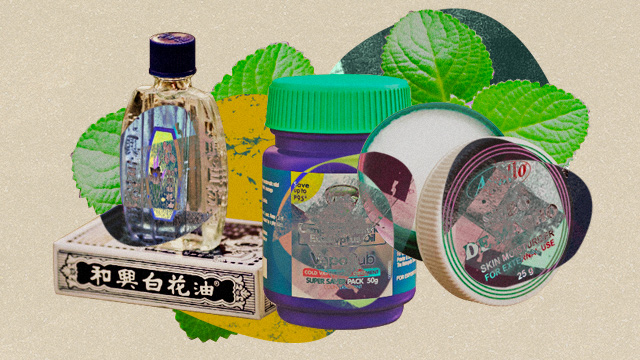 10 Nostalgic Health Products Your Grandparents Gave You That Honestly Worked

What magic did these things have?

(SPOT.ph) You’re not the only one still chasing the high of delving through your lola’s purse back when you were a kid (a.k.a. that point in your life when you could still wonder at the little things). Remember the glasses, the pocketbooks, rosaries, tissues, pictures, random abubot you’d pull out while looking for a snack? Or better yet, the moment you said you felt even the littlest bit off and your grandparents would magically pull out some strange elixir from the depths of their bags or pockets? We never really could figure out the magic behind their potions, but somehow, we always felt better after whatever treatment they gave. We take a stroll down memory lane and list down some of the most nostalgic treatments your grandparents had in their arsenal—and that you might have some version of now.

Take a walk down memory lane with these 10 nostalgic health products from your childhood:

Remember those minty oils your lolo and lola used to rub on almost 24/7? On the opposite of the oil spectrum is this non-spicy one. What it lacks in terms of spice though it makes up for by being the hardest-working one out there. We’re talking multi-purpose. You could cook with it, use it as a hair mask, lotion, lip balm, heck, even use it on your teeth—and yup, straight up drink it for your health. It’s no surprise if your parents used to make you take a spoonful of this heavy oil every morning. Drinking oil as is isn’t exactly at the top of our list of pleasant childhood memories but hey, we definitely can’t discount the benefits.

Who would have thought mutton tallow and wax would make for a pretty reliable skincare product? Old folks typically use this balm to help lighten fairly recent scars—and with all the cuts and scrapes we’d get as kids, we can’t even count the number of times our grandparents would patiently hunt us down after our baths to apply this on our marks pretty much daily. Tallow as a skincare ingredient is primarily a moisturizer of the very intense kind.

And stale crackers. Yup, the power combination whenever you were hit with a stomach bug and couldn’t keep anything down. Lots of Pinoy kids probably remember being given a glass of lukewarm soda, with all the bubbles gone, alongside some very basic crackers with a hint of salt. If you still sometimes prep this power combo for yourself when you’re down, even if it is just to raise your spirits, then we totally get it.

Of all the weird combos we had as kids, this has to be the absolute winner. You’re lucky if your folks didn’t force this on you and just imbibed it themselves—but we’re sure there are a few out there who know what sarsaparilla with a literal raw egg mixed in tastes like. Hey, think of it as a random fact you can use during party icebreakers. So why did folks in the ‘70s drink this? Well, raw eggs supposedly help build muscle while the strong soda flavor is meant to mask the fact that you’re drinking well, raw eggs.

You know how certain scents can bring you back to a specific time and place? Well, we’re sure you know this one. Cue a flashback to that weirdly spicy oil that smelled so cold but pretty much burned deep into your muscle. The older folk absolutely loved it and we’re sure you know a tito or two that smelled permanently of it. And yup, you probably have a small bottle stashed away somewhere now whenever your muscles need a bit of relief (a.k.a. old-people pains)—we totally get you.

And we’re back to the spice. If the cold mint comes in oil form, we’re sure you’re familiar with the topical ointment version. Okay, so strictly speaking this ointment is actually cough medicine. Yup, you heard that right; it’s meant only for cough and colds. Not that your grandparents listened. They probably used it for everything! Head heavy? Rub some on. High fever? Rub more on. You failed your math test? You’re probably not using enough.

Speaking of multi-purpose products, that old jar of cold cream on your grandmother’s dresser was probably her best weapon yet. This emulsion was used for a lot of things. Sure, the main purpose is to remove makeup and moisturize the skin, but we know she used it on you as an all-around balm of sorts. We’re talking cleaning out dirty kids’ ears and belly buttons as well as helping wounds and scrapes heal a little better—all with the power of this oddly cool cream. We know that old pink jar has a special nostalgic place in your memory.

Remember the times you’d walk into the kitchen to see what’s bubbling away on the stove—only to lift the pot’s lid and be greeted with that distinct earthy smell of a bunch of leaves being boiled? And then realize that you’d probably be subjected to having to drink this herby concoction with a hint of slime? Depending on whatever ailment was bothering you—or really, just your grandparents but they want you to be treated too—the leaves in question would either be those fragrant, oddly furry oregano ones or from the bayabas outside. Truth be told, our grandparents’ knowledge on which plant to use for which ailment and how is one heck of a superpower we wish we had too.

Grandparents tend to carry around a bunch of treats for their apo—and sometimes, they’d even give out those erm, healthy candies if you ever felt sick. You know the ones. Those strange lozenges with words written in a language you couldn’t read but had the menthol power to kick out whatever heaviness you were feeling from your body. Talk about being effective!

Ginger (Straight Up or as Salabat)

On top of the list of random plants your grandparents gave you for your health is probably ginger. So you probably wanted to pick it out of tinola, lugaw, and such but you wouldn’t be alone if your parents made you eat it anyways. Or sometimes, they’d give it to you as salabat—a.k.a. a drink typically made from boiling slices of ginger or from ginger powder and ideally sweetened, but we know some folks like it as is.  We still don’t understand how a root crop could be so spicy and—now that we’re older—oddly calming too.