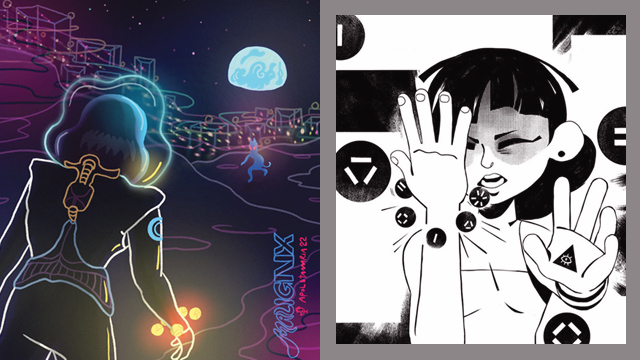 It's by Dan Matutina, Craig Halili, and Anton Romero.

(SPOT.ph) Filipino mythology may not be as widely known as the stories of Greek and Roman gods and goddesses, but best believe that it is as rich and as varied as our number of islands and variety of ethnolinguistic tribes. It’s a treasure trove of stories that can be told and retold, adapted to different times, and transformed creatively. We've had the Netflix adaptation of the comic-book series Trese, for one. Most recently, Filipino designer and illustrator Dan Matutina imagined a futuristic world where malignos and humans are in peaceful co-existence through a new comic series titled Malignx (pronounced muh-leeg-neks). The first chapter was released on January 24 with a backstory published on January 1. Best of all? It's available for free online!

What you should know about Dan Matutina's Malignx comic series

With story by Matutina, art by Craig Halili, and co-design by Anton Romero, Malignx begins on August 8, 2219, which happens to be the 200th founding anniversary of the Philippine Space Agency. It follows Bituin Pulajanes, a mechanic of Banahaw-1, the Philippines' first commercial space freighter on a mission to start a new Manila colony on one of Mars' moons, Phobos. In between the pages are flashbacks to the tumultuous "Taguan Conflict," a decade-long war between creatures of the underworld and humans and how this paved the way for the peaceful "Kislap Era."

Aside from the black-and-white comics by Matutina, Halili, and Romero, you can also check out fan art by Apol Sta. Maria and listen to a theme song titled "BK-017" performed by Paul Puti-an on Malignx's page.

"Growing up in Tacloban, the stories about these mythical creatures seemed so real. Our friends would talk about the wakwak that supposedly tried to get into the house of one of our neighbors. Or the sigbin that supposedly bit my cousin. I’ve always believed they were real. I think it’s important to tell these stories because there’s still a lot to tell. On page 29, the words that Bituin is chanting in Waray, is an actual chant that my grandmother (and later on my mother) would say to us when we experience ugmad or na-ugmaran (sickness by fright). I just tweaked the last line, so there’s a twist. Instead of making Bituin forget (which was the original intention of the chant), it made her remember her family’s power," Matutina tells SPOT.ph on the importance of championing Philippine mythology in contemporary art and literature.

Matutina, co-founder of graphic design studio Plus63 and multi-headed design firm Hydra, is known for his angular style, mix of old and modern aesthetics, and creative use of basic shapes. One of the leading designers in the Metro today, he has illustrated for international publications such as Wired, The Guardian, The Wall Street Journal, and The Washington Post. He's also behind the logo rebrands for the UP Fighting Maroons and Summit Media.