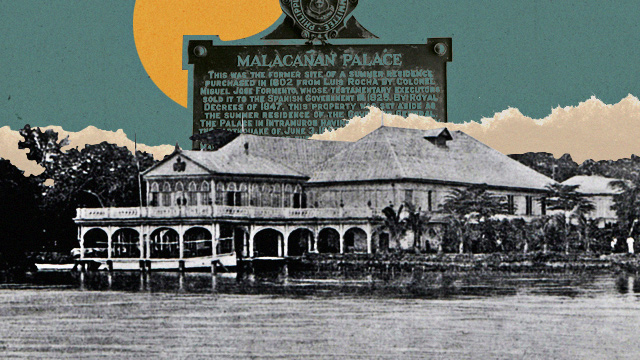 Things You May Not Know About the Malacañan Palace

It's the "palace of the people," for one.

(SPOT.ph) Somewhere in Manila is a huge complex surrounded by checkpoints and security. At the center of it is the official residence of the president of the Philippines, which is known as the Malacañan Palace (or the Malacañang). The seventh president of the country, Ramon Magsaysay, called it the "Palace of the People," with the moniker inscribed on his statue in one of the hallways of Malacañan Palace. But aside from its significance as the country's seat of power, the structure has a rich history that's also worth knowing about.

Here are things you may not know about Malacañang:

The Palace was originally a 1700s summer house owned by Don Luis Rocha, a Spanish merchant. The property was sold for P1,000 to then Manila mayor, Colonel José Miguel Formento; then later sold to the Spanish colonial government.

But it wasn't until 1863 that Malacañan Palace was used by government officials. Governor-generals resided at the Palacio del Gobernador in Intramuros, but they were forced to move out following a strong earthquake that destroyed the structure. Governor-General Rafael De Echague Y Bermingham was the first chief executive at the Palace.

It's Malacañan Palace or Malacañang, but not Malacañang Palace.

Malacañan Palace is located along President Jose P. Laurel Street, which was originally called Calzada de Malacañan—thus the Malacañan without a "g" in most Spanish publications at the time. Plus, the colonizers didn't really have a terminal "ng" sound.

Presidents at the Malacañan

Former presidents Corazon Aguino and Fidel Ramos resided at the nearby Arlegui Guest House, now called the Laperal Mansion. Aquino set up her office at the Premier Guest House, while Ramos preferred to go to Palace to work. One president that opted to live and hold office in one location was Joseph Estrada, who selected the Premiere Guest House as his residence and office. Benigno Aquino III, on the other hand, intended to stay in his family's home along Times Street, but ended up residing at Bahay Pangarap within the Malacañang Complex during his term.

The "Palace of the People," as Magsaysay called it, was occupied for 20 years by the Marcoses, who made extensive remodeling to the Palace—including bedroom suites with bullet-proofed windows, the installation of a discotheque, and an enlarged presidential bedroom. While the Palace received foreign guests and other prominent names, the Filipino people were denied entry to the residence of the first family, as pointed out by Aquino's September 10, 1986 memorandum.

AP News reported on February 26, 1986, that when the gates of the Malacañang opened for a few photographers, "the crowd pushed through into the palace the Marcos family occupied for 20 years, shouting and grabbing anything they could carry." This was after the family "left the presidential palace shortly after 9 p.m. and traveled by helicopter to Clark Air Base," as reported by The New York Times. Supporters of Aquino and Marcos, according to news reports, hurled rocks at each other as fights and looting ensued.

But most of the cash and valuables were stuffed into suitcases by the Marcos when they fled to Hawaii. According to the U.S. Customs Service, "the Marcoses and 88 family members and associates took more than 400 items of costly jewelry, including a golden crown and three diamond-studded tiaras; more than 60 sets of pearl necklaces and chokers; a U.S. $290,000 Burmese ruby, and a diamond-studded ornamental hair comb worth U.S. $44,410. The gems and jewelry were valued at U.S. $4 million." The party also "transported 22 crates containing $1.2 million in Philippine pesos."

Opening to the Public

The Malacañan Palace was opened to the public for tours through a memorandum order issued by Aquino on September 10, 1986. "The [Malacañan] Palace has assumed such historical significance and value and world-wide esteem and curiosity that the Filipino people who were denied entry thereto during the [20] years of Marcos regime, as well as the people from all over the world who were amazed by the opulence that characterized the occupancy thereof by the family of depose President Ferdinand E. Marcos, repeatedly demand the continuous opening thereof to public viewing and tours," the memo said.

Public viewing, however, was subject to a "reasonable entrance fee" and that operation and management were entrusted to a private foundation.