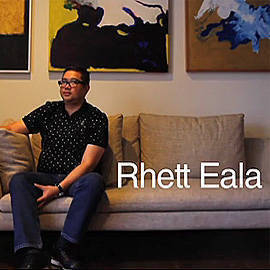 VIDEO: Why You Do What You Do: Rhett Eala

Celebrating his 20th year in fashion on October 5, the "Father of Fashionalism" tells us why he does what he does.

This week we launch "Why You Do What You Do," a series of short videos capturing snippets of the lives of some of the country’s most influential personalities, "people who have transformed an idea into reality out of their passion for a certain craft or field," says the videos’ producer Julo de Guzman. Cinematographer Marco Limjap says their candid style of filming captures the everyday essence of the reality of their subjects’ lives. "Nothing really is planned. Everything is all about improvisation and learning through your surroundings," he says.

For the first clip of the series we cast the spotlight on the "Father of Fashionalism" Rhett Eala, who celebrates his 20th year in the fashion industry via a milestone fashion show tomorrow, October 5 at White Space. Eala is known for coining the term "fashionalism," or the fusion of fashion and nationalism--and for making the Philippine map the well-loved fashion symbol it is today. De Guzman says Eala came to mind one day "when we were talking about the iconic Philippine map shirts from Collezione. As the designer of the shirts that signify nationalism and pride for the country, we thought it was imperative to feature him."

When they started filming, says director Nicky Daez, Eala was very camera-shy, but warmed up as filming continued. De Guzman said Eala’s "focus and attention to detail at work were contagious. It pushes you to have that same mindset at work, because there is really no substitute for hard work." He adds, "Rhett is one example of intersecting your passion and social responsibility. Don’t just do something that you love, do it while giving back. If you can do both at the same time, then that’s a life worth living right there." Limjap adds, "He loves what he does, and does what he loves."

Watch the video and get to know the man behind the fashionalism phenomenon.

Why You Do What You Do: Rhett Eala Wyd Rhetteala Fashionalism
Your Guide to Thriving in This Strange New World
Staying
In? What to watch, what to eat, and where to shop from home
OR
Heading
Out? What you need to know to stay safe when heading out