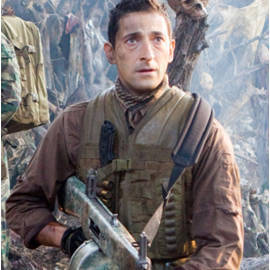 For the men and boys who were starved of a slam-bang action movie because of the saturation release of last week’s female-oriented Twilight Saga: Eclipse, fret no more. There’s an exciting new guy movie in theaters now, and it’s Predators. A sequel to Predator (1987) and Predator 2 (1990), Predators ignores the events depicted in the Alien vs. Predator movies from 2004 and 2007, and is produced by maverick filmmaker Robert Rodriguez. In the sci-fi action adventure, Oscar winner Adrien Brody is Royce, a mercenary who leads a group of warriors who are being hunted on an alien planet by a new breed of predators. The warriors, most of whom are either elite soldiers or mercenaries, include Isabelle (Alice Braga), Stans (Walter Goggins), Cuchillo (Danny Trejo), and the seemingly out of place Edwin (Topher Grace).

Predators grabs one’s attention immediately, with its opening shot of Royce plummeting towards an earth-like planet in broad daylight, his fall slightly aided by a malfunctioning parachute. As he looks around at the forest where he has landed, he sees other people falling from the sky, like grown-up babies being drop-delivered to their new homes by a demented stork. The film is at its best when Royce and the rest slowly realize who or what kidnapped them, and why they were dropped on an alien planet where the sun doesn’t move. Predators director Nimrod Antal uses his uncommon gift for building tension (he also directed the unnerving snuff film Vacancy) and creating creepy situations in the clues which lead to this epiphany. They include the unforgettable scene where a character who must surely be dead begins to talk, and the scene where our hunted heroes come across a crucified creature and we, as fans of the earlier Predator movies, realize that the beings hunting them are more powerful than we thought.

Unfortunately, this disquieting feeling of tension diminishes as more details are revealed about the true nature of the protagonists. Instead of enriching our appreciation for the movie through the provision of answers to certain questions, our initial admiration for it is replaced with dawning puzzlement. For example, after we’re told who the true villains/hunters are, what’s not explained is the mechanism which they use to kidnap the humans. We’re not told either why the aliens provide their quarry with parachutes at all, especially if they possess advanced technology that allows them to transport their targets instantaneously from one planet to another. And if the sun doesn’t move on the planet, why does it suddenly become nighttime midway into the movie?

Such quibbles, however, will be ignored by viewers who just want to see a good Predator movie again, with all the graphic depictions of piercing and maiming that are part and parcel of an R-13 movie about hunters and hunted. In terms of action and spectacle, Predators delivers the goods, and more. I was grateful for the use of more old-fashioned filmmaking techniques for the action setpieces, rather than on the now-common use of computer-generated images (CGI), which films like Prince of Persia and Percy Jackson used to numbing effect. There are a few CGI touches here and there in Predators, but they maintain the fan-pleasing, familiar tone of the original Predator films. Also enjoyable is a twist involving one character’s back story, and a surprise appearance by another actor famous for his work in a popular film trilogy.

That Predators is squarely aimed at male moviegoers is obvious when one recalls a few of the movie’s best lines, which are all delivered by Walter Goggins (Detective Shane on the TV series, The Shield) as Stan. Among them are, "Die you space faggot," and "I can’t wait to get home and do a bunch of cocaine," which he utters after a very close call with the aliens. There’s also his short and sweet assessment of Alice Braga’s behind: "Your ass is awesome."

For the men out there who had to endure the chick flick Eclipse because there was nothing else to watch last week, Predators is your chance to turn the tables on your significant others. It’s now your time to be entertained, their time to suffer silently in their seats.

Movie Review Predators Adrienbrody
Your Guide to Thriving in This Strange New World
Staying
In? What to watch, what to eat, and where to shop from home
OR
Heading
Out? What you need to know to stay safe when heading out