James Younghusband admits he has a girlfriend, Phil says he and Angel Locsin are in the "getting-to-know-you stage"
Loading
Already a member? Log in
No account yet? Create Account
Spot.ph is your one-stop urban lifestyle guide to the best of Manila.

James Younghusband admits he has a girlfriend, Phil says he and Angel Locsin are in the "getting-to-know-you stage"

Brothers James and Phil Younghusband of the Philippine National Football Team (also known as the Azkals) talked about their love life in recent reports by Saksi and TV Patrol.

According to Saksi, James is dating a Filipina football fan. He admitted to having a girlfriend in the TV Patrol report and said, "Yes I am [taken]." Meanwhile, his younger brother Phil said that he has gone out on dates with actress Angel Locsin and that they are still in the "getting-to-know-you stage."

During the Collezione-C2 press conference held yesterday where the brothers were officially launched as the newest brand ambassadors, SPOT.ph asked Phil how his target shooting date with Angel Locsin went. "It was fun," Phil said. "It was my first time to go target shooting. We had a competition and I won. It was good fun." 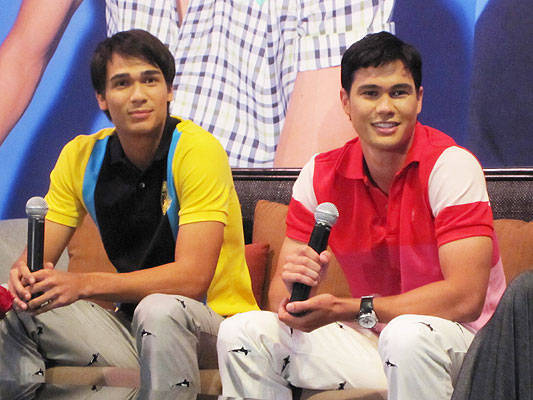 James and Phil Younghusband at the Collezione-C2 brand ambassadors launch

On February 10, Phil asked Angel out for Valentine’s Day through Twitter but the actress declined saying she had to work that day. SNN reported that the two went target shooting on February 20 in Taguig. When asked if he thinks Angel let him win he said, "I hope not."

The football hearthrobs were also asked about what girls could do to get their attention.  "Play football," James answered. According to the older Younghusband, he has always been interested in girls who have the same interest as his like art, movies, football, and other sports.

"It’s very hard to meet someone at a bar or anywhere and just go up to them and tell them you like them," Phil said. "Often it’s through a family friend or through work or something in common. I think it’s about being at the right place at the right time."

James also said that he doesn’t mind if the woman makes the first move. "I like girls who do that, who take charge."

Phil Younghusband Jamesyounghusband Angellocsin Collezione-c2
Your Guide to Thriving in This Strange New World
Staying
In? What to watch, what to eat, and where to shop from home
OR
Heading
Out? What you need to know to stay safe when heading out