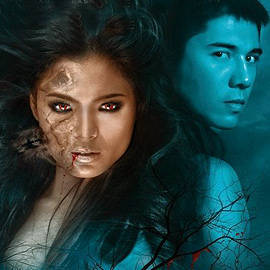 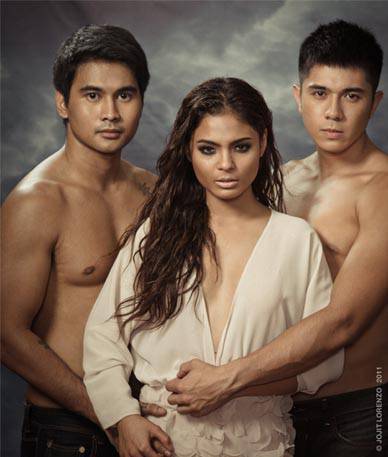 How did you spend the recent holiday? Nakipagsisiksikan ka ba sa sementeryo o nakipagsosyalan sa beach? I stayed home, like a loser, but the truth is I rather like the city when it's empty. Oh, and I watched a bunch of mananaggal movies and had a couple of drinks with the manananggays.

On a gratifyingly large screen with a proper sound system, I saw on its premiere night Jerrold Tarog's Aswang starring Lovi Poe as a monster trapped in a woman-child's exquisite form. Lovi, fresh from her box office successes as a bitchy beauty pageant contestant in Joey Gosienfiao's Temptation Island and an adulterous best friend in My Neighbor's Wife, is back in fine form as the beautiful and mysterious dalagang bukid who helps two helpless kids (Albie Casiño and adorable Jillian Ward) escape a whole plantation full of aswang and hired hit men. In the course of trying to save them, she falls in love with a human-Daniel the hit man-played by Paolo Avelino, who is turning out to be a viable leading man and a competent actor. Plus he's hot.

It's a bit of a convoluted plot and I won't reveal any more, but it will not disappoint. Aswang unfolds nicely with Jerrold Tarog's skilled storytelling, planted with bits of back story and clever explanation throughout, punctuated with effective scares and tasteful scoring. (It's also beautifully shot by Mackie Galvez, whose Tree Of Life-inspired wildlife details are wonderful to behold in a Regal film.) As a horror movie, it's polished and taut, and they didn't scrimp on the blood and gore (done by the expert hand of prosthetics veteran Cecile Baun)-so despite the Zombading-looking abwaks, it stands on its own and makes a unique contribution to the genre.

In folk tales and film, the aswang is portrayed as a flying femme fatale, a beautiful woman who transforms into a horrible winged creature on the night of the full moon. She drinks the blood of the innocent, eats babies and internal organs-living up to one of her names, manananggal or "one who removes." They say there are towns deep in the province with whole baranggays populated by aswangs. In Peque Gallaga's first Shake, Rattle and Roll episode (also part of my Halloween viewing list), the manananggal is defeated by a hapless but brave Herbert Bautista, who has to find the creature’s lower half and sprinkle it with lots of rock salt and holy water. It's the sheer tenacity of the first SRR manananggal that makes her so scary; her instincts are animal-like and ruthless as she claws through the nipa hut and screeches like a harpy. In Romeo Candido's Ang Pamana from 2006, we had our manananggal enter the house through a large window and crawl across the sala to the petrified pregnant girl bleeding on the floor.

But the abwak in this version are more like distant cousins of the traditional manananggal-their diet consists of the same things but their motivations are somewhat different. Like vampires, they live in a community/coven, with a leader (see Bembol Roco in a slightly kung fu-esque disguise and, heaven help us, a white wig), a female right hand (Precious Lara Quigaman, inexplicably enough, attired in floral maxi dresses), a hot henchman (Joem Bascon) and of course, the rebellious princess who threatens the grand plan of race supremacy by falling in love with and saving a human. This notion of cross-breeding the Monster with The Other, of love intertwined with death, is usually successful in this era of Twilight. (In one sequence, Lovi takes Paolo by the hand and they run deeper into the forest-slowed down with a tinkling piano in the background-it felt like something out of the Twilight series. But maybe I was imagining it? I've only ever seen the first one.)

Well, whatever it is, this Aswang smells like a hit. It blends Filipino folklore and speculative fiction, horror and action (hurrah for that dying genre), stars and starlets, inventive production design and attention to detail. In the end, this intelligent movie will compel the audience to think along with it-just as much as it will entertain, fascinate, and provide much needed escape.