(SPOT.ph) Overdose on reel goodness at the  Cinemanila International Film Festival from November 11 to 17 at the Market! Market! Cinemas in Bonifacio Global City, Taguig.  On its 13th run, Cinemanila brings you over 80 international and local films-from festival favorites (Cannes, Berlin, Rotterdam, Sundance, and Pusan) to award-winning indie films-all in a span of seven days.

Two documentaries by three acclaimed European filmmakers are set to open and close the festival. New German Cinema master Wim Wenders’ 3D film Pina opens the festival on November 11. This is the first time for Cinemanila to screen a 3D film. Ridley Scott and Kevin Macdonald’s Life in a Day concludes the festivities on November 17. The flick shows different occurrences around the world on July 24, 2010 and is an arranged series of video clips from 80,000 YouTube selections. 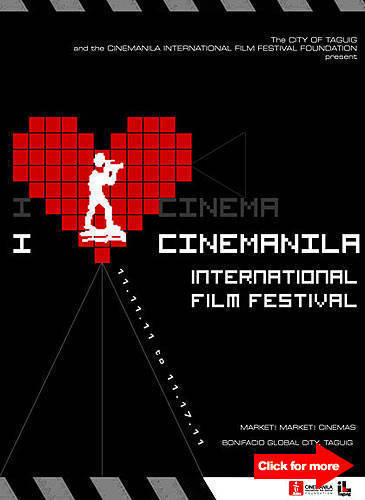 Do you love cinema? Check out this year’s Cinemanila filmfest. Click for more.

For the International and SoutheastAsian (SEA) Competitions, seven and five films are competing, respectively. The international finalists include Gangor by Italo Spinelli (Italy); If I Want to Whistle, I Whistle by Florin Serban (Romania); Once Upon a Time in Anatolia by Nuri Bilge Ceylan (Turkey); Poetry by Chang-dong Lee (South Korea), Siglo ng Pagluluwal (Century of Birthing) by Lav Diaz (Philippines), The Sun-Beaten Path by Sonthar Gyal (China), and Toomelah by Ivan Sen (Australia). For the Southeast Asian category, check out Boundary by Benito Bautista (Philippines), Eternity by Sivaroj Kongsakul (Thailand), The Mirror Never Lies by Kamila Andini (Indonesia),Water Hands by Vladimir Todorovic (Singapore),  and Golden Slumbers by Davy Chou (Cambodia).

Get goosebumps with the Horror Picture Show program, which includes four horror-thriller films: I Saw the Devil by Kim Jee-Woon; Vanished: Age 7 by Ryuta Miyake; The Tunnel by Filipino director and Cannes Film Festival winner Carlo Ledesma; and Suspiria by Dario Argento.

Sports fans will love The Beautiful Game, a new program featuring the popular sport of football. The cinematic lineup includes Rise & Shine: The Jay DeMerit Story; Zidane, A 21st Century Portrait; The Two Escobars; Offside; The Cup; The Striker with Number 9; Bend It Like Beckham; and our very own Happyland by Jim Libiran.

You might also be interested in viewing the 31-minute fantasy-horror iPhone film Night Fishing by South Korean filmmaker Park Chan-wook for his The Vengeance Trilogy-Sympathy for Mr. Vengeance (2002), Oldboy (2003), and Sympathy for Lady Vengeance (2005). Park, co-directing with his younger brother Park Chan-kyong, shot the film entirely using an Apple iPhone 4.

The festival also launches Moonlight Series on November 14 with the screening of Bend It Like Beckham on the lawn of Bonifacio High Street in Taguig City. The event is a twice-a-week (Thursdays and Fridays) outdoor film screening starting 7 p.m. The series runs from January to May 2012.

For ticket inquiries and more information,more information, log on to w.ww.cinemanila.org.ph For updates, join the Cinemanila International Film Festival Facebook group and follow @CinemanilaIFF on Twitter. Cinemanila also has a lineup of workshops, seminars, and master classes.