Gloria Macapagal-Arroyo's lawyer releases photos of her wearing a halo cervical neck brace, DOJ remains unmoved
Loading
Already a member? Log in
No account yet? Create Account
Spot.ph is your one-stop urban lifestyle guide to the best of Manila.

Interaksyon.com reports that Department of Justice (DOJ) Secretary Leila de Lima has officially turned down the request of former President Gloria Macapagal-Arroyo to travel abroad to seek treatment for a rare hormonal disorder. 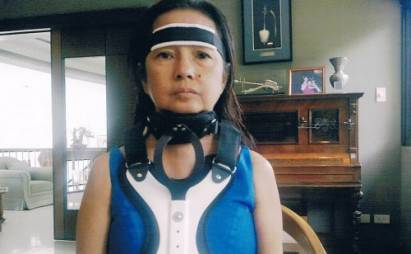 Former president and current Pampanga congresswoman Gloria Macapagal-Arroyo in one of the photos released by her lawyer, Atty. Estelito Mendoza

Interaksyon.com reports that Department of Justice (DOJ) Secretary Leila de Lima has officially turned down the request of former President Gloria Macapagal-Arroyo to travel abroad to seek treatment for a rare hormonal disorder.

At a press conference held on Tuesday, November 8, De Lima said, "(Arroyo’s) condition is not life threatening and will not result in irreparable damage based on the evaluation of Health Secretary (Enrique) Ona."

De Lima went on to give the following as reasons for thumbing down Arroyo's request for an allow departure order: 1. There is no compelling need for her to travel abroad; 2. The five countries Arroyo said she plans to travel to (Singapore, Germany, Spain, United States, Switzerland) do not have extradition treaties with the Philippines; and 3. Arroyo's promise to return to the country is contingent on the completion the her medical treatment.

De Lima also brought up the "changing list of countries mentioned by Arroyo in her request to travel." According to the report, "Initially, Arroyo named Singapore, Germany and Spain-with which the Philippines has no extradition treaty. Then Oslo was included to the list, followed by the United States and Geneva, Switzerland. The most recent list again name Singapore, Germany and Spain." The report did not indicate which five countries are now on Arroyo’s list.

The former president’s husband, Mike Arroyo, seemed unfazed by the DOJ decision. He said: "It doesn’t matter. It’s anti climactic because former President Arroyo already filed a petition in the Supreme Court questioning the (watch list order) for being violative of her constitutional right to travel."

Reacting to the photos, Deputy Speaker Lorenzo Tanada said it was "hard to determine by pictures that Representative Arroyo is deteriorating. A picture can be deceiving. It is better to rely on the medical reports and what the doctors say. She still has a remedy by going to the SC to prove that her constitutional right to travel has been violated."