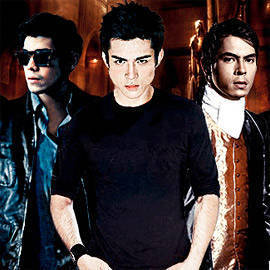 Move over Rob-Pat, these men can take over.

All they need is a set of fangs. Click for more.

(SPOT.ph) They didn't always sparkle. Bram Stoker is probably rolling in his grave at the very thought.

When Stoker wrote Dracula in 1897, he envisioned a monster that, at the very least, was a gentleman. Count Dracula was tall and thin with sharp teeth, a hooked nose, and pointy ears; he wore a narrow white mustache with a matching beard-an appearance that could, collectively, be deemed disconcerting if not menacing. Though Stoker neither invented the idea nor first wrote about it, he inspired an image that defined the fanged creature in the years to come-only slightly reworked in later versions. For instance, it wasn't until the 1922 flick, Nosferatu, when vamps developed um... a sun allergy.

With the stereotype came an onslaught of vampire-related entertainment: from books turned films like Anne Rice's Vampire Chronicles and the Blade Trilogy to television shows like Buffy the Vampire Slayer and True Blood; manga like Hellsing; video games like Castlevania; and so on. There's no killing the myth even if we stab it with a cross-shaped, garlic-covered, holy water-soaked stake at high noon.

But fortunately and unfortunately, that's only the beginning. With the Twilight Saga, The Vampire Diaries, the short-lived supernatural series The Gates, plus more vampiric lore in between, it's safe to say that the vampire genre is finally at its peak (sorry, witches). While vampires may not be an entirely Filipino concept (the aswang still dominates the local blood-sucking monster category), these nocturnal beings have a steadily rising fan base-thanks in large part to their newfound status as misunderstood, shimmering studs (thanks, Stephenie Meyer, really).

Mired in Breaking Dawn mania, we're putting a Pinoy twist to the current vampire fever. Several actors have slipped in and out of the fanged franchise, but we have to admit that not all of them fit the role to a tee (we don't mean you, Rob-Pat). We've got our own share of "vampy" actors; these 10 men may not live on a diet of blood, but we're sure they can rock oversized canines better than the Cullens.