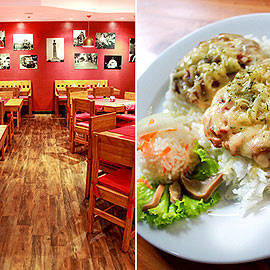 CHECK IT OUT: Balkan in Legazpi Village, Makati

Curious about Yugoslavian food? Head to this Makati spot for hearty meat dishes and more. 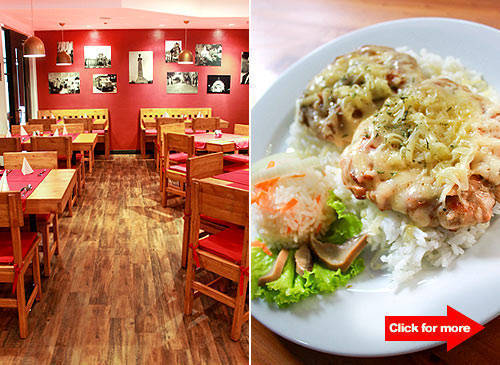 (SPOT.ph) You don’t hear a lot of people craving Yugoslavian food in Manila, not even in the most discerning, adventurous foodie circles. Balkan, a new neighborhood food haunt in Makati, just might change that.

Balkan is the swankier sister of Balkan Express in San Juan, tucked away in a quiet area of Perea Street in Legaspi Village. Run by Martin Batricevic, a hands-on 20-something restaurateur from Serbia who moved to Manila a year and a half ago, the red-themed restaurant is the kind that casts a spell on meat-eaters with a seductive menu of popular Yugoslavian food.

What exactly is Yugoslavian food, you ask? Simple. Lots of hearty meat, lightly seasoned and grilled. Flavors are kept simple-often, the chef lets the meat’s natural robustness speak for itself, adding only a few spices to do the wooing. Most dishes are served with rice, mashed potatoes, and a specifically rave-worthy bread baked fresh on-site that’s like a cross between a pita and a pandesal (a must-try!).

If you must try just one thing here, go for the Jagnjetina Lamb (P700), which Balkan lists as a house specialty (and rightfully so). The meat is boiled until soft and tender so it literally slides off the bone; its flavors kept spectacularly straightforward. If you’re not big on lamb, try the Cevapcici, a popular dish made with tasty Serbian sausages that’s easily one of the friendliest, most likable things on the menu. Served hamburger-style, each bite is a mouthful of juicy, spiced ground beef.

Comfort food takes form in the Pljeskavica (P320), a mozarella-stuffed burger served with fries-unsurprisingly one of the bestsellers here. If you’re in the mood for something heftier, order the Sarma (P260), a specialty typically served during Christmas according to Batricevic, which throws together pickled cabbage rolls stuffed with beef, and a generous serving of mashed potatoes. Vegetarians (and cheese fanatics) will love the Sopska (P200), a refreshing salad that owes most of its flavor to a slathering of feta cheese atop crisp cubes of cucumber, tomatoes, onions, and olives.

For dessert, Balkan serves a mean apple pie that adopts the look of pocket pastries with a flaky crust, filled with chewy strips of apples spiced with cinnamon. They also make pretty stellar Serbian crepes (P120) here-ones you might just purposely seek out-filled with your choice of chocolate or apricot jam.