P-Noy accused of partying while tropical storm Sendong kills hundreds in Mindanao
Loading
Already a member? Log in
No account yet? Create Account
Spot.ph is your one-stop urban lifestyle guide to the best of Manila. 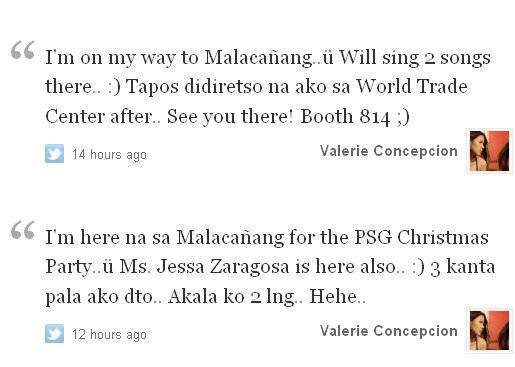 Interaksyon.com reports that actress Valerie Concepcion posted on her Twitter page on Sunday, December 18, that she had just come from a party at Malacañang. "Done w/ work.. Tnx for having me.. :) It was nice to see Pres. P-Noy laughing at my jokes & enjoying my performance..ü #Malacañang #PSGNight," she wrote.

Interaksyon.com writer Joseph Holandes Ubalde noted that Concepcion’s tweet had been deleted as his own article was posted a little after midnight on Monday, December 19. Holandes also revealed: "In her series of tweets, Concepcion said she was performing three songs for the President and was alongside singer Jessa Zaragosa, who was one of the performers."

What made Concepcion’s tweet somewhat incendiary was the fact that the very same day of the said party, tropical storm Sendong had devastated the cities of Cagayan de Oro and Iligan. According to the report, the death toll had climbed to more than 600.

To confirm Concepcion’s tweets, InterAksyon.com called the Presidential Security Group early Monday and "confirmed that the PSG Christmas party was indeed held in Malacañang Sunday night." The report said "the PSG personnel, who refused to be identified, said he was ’not authorized to say if the President’ was there."

Interaksyon.com observed that "Concepcion's tweets have caught the ire of many Filipinos on the microblogging site who assailed the president for partying while Filipinos are suffering the brunt of Sendong."

Noynoy Aquino Sotrm Sendong Mindanao Cagayandeoro Iligan
Your Guide to Thriving in This Strange New World
Staying
In? What to watch, what to eat, and where to shop from home
OR
Heading
Out? What you need to know to stay safe when heading out