PAWS seeks to confront owner of SUV photographed with a dog in a sack tied to back of vehicle
Loading
Already a member? Log in
No account yet? Create Account
Spot.ph is your one-stop urban lifestyle guide to the best of Manila.

InterAksyon.com reports that a photograph of a dog in a sack and tied to the rear of a black 1998 Nissan Safari with the license plate BDK 617 became viral on Monday, March 12. 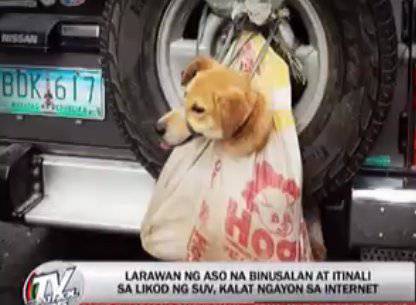 The dog in a sack appears to be tied up and "muzzled" as well. (Screenshot from ABS-CBN News video clip.)

InterAksyon.com reports that a photograph of a dog in a sack and tied to the rear of a black 1998 Nissan Safari with the license plate BDK 617 became viral on Monday, March 12. This prompted the Philippine Animal Welfare Society (PAWS) to go to No. 27 Dalahican Street, Damar Village in Quezon City, the listed address of Apollo International Cagayan Trading, the registered owner of the vehicle. PAWS Anna Cabrera revealed that Atty. Jose Yap was said to be the owner of the Damar Village house. Cabrera was told that Yap was not around.

Incidentally, InterAksyon.com research revealed that Apollo International Cagayan Trading "is engaged in the import of used vehicles." The report also noted: "In 2008, the company was involved in an alleged smuggling activity, which its officials have vehemently denied."

ABS-CBNNews.com reports that their own crew went to Damar Village as well. This was after they got in touch with PAWS and were told that a maid had also confirmed that the vehicle in question indeed belonged to the house’s resident. However, the ABS-CBN News crew got a different reception. First, they were denied entry by the village security guards. Next, some barangay officials denied that the existence of the Nissan Safari. However, ABS-CBN News revealed that some residents claimed that Atty. Yap was rushed to the hospital because his blood pressure shot up when the news about the SUV photographed with the dog in a sack broke out.

In the ABS-CBNNews.com report, PAWS officials indicated that they were waiting for Yap to get in touch with them so that he could issue his own statement.

For more on this story, log on to InterAksyon.com and ABS-CBNNews.com.

Paws Animalcruelty Dog
Your Guide to Thriving in This Strange New World
Staying
In? What to watch, what to eat, and where to shop from home
OR
Heading
Out? What you need to know to stay safe when heading out