These Internet sensations have come a long way.

(SPOT.ph) The Internet is largely responsible for the discovery of many superstars in recent years, some of whom are proudly homegrown. These people have come a long way, starting out from just using YouTube to showcase their talents to becoming online sensations with thousands of followers.

Simply put, it wouldn't be such a bad idea to model your life after the likes of Mikey Bustos, Bogart the Explorer, and the rest of these rising YouTube stars. Read on to know more about them:

1. Mikey Bustos
Subscribers: 282,530
What started out as funny commentaries on Filipino culture from the eyes of a balikbayan, Mikey’s page has now become a source of Filipino pride for people here and abroad.

2. Bogart the Explorer
YouTube subscribers: 56,583
The explorer from down under is seriously funny, incredibly quick on his feet, and has perfected his version of an Australian accent. A testament to his awesomeness: Bogart has earned the right to mingle with the likes of Hugh Jackman and Zoe Saldana during press junkets.

3. Lloyd Cafe Cadena
Subscribers: 349,562
Lloyd takes pride in making videos that are extremely funny and highly relatable. He also happens to be the star of dozens of hugot memes about love and career, all of which you can easily Google.

4. Gab Valenciano
Subscribers: 99,376
The son of legendary crooner Gary Valenciano, Gab successfully stepped out of his famous father's shadow by creating his now-viral super selfie videos on YouTube. His choreography for Beyonce's "7/11" music video even earned him an MTV Video Music Award nomination in 2015!

5. The Filharmonic
Subscribers: 120,321
The Fil-Am group first turned heads during a stint in the a capella singing competition The Sing-Off, but has since sustained their popularity with a cameo performance in last year's Pitch Perfect 2.

6. Wengie
Subscribers: 1,233,500
Welcome to the wonderful world of Wengie! Known for her makeup demonstations and relationship advice, Wengie is the woman behind Australia's top Asian beauty channel and the fourth most subcribed beauty and lifestyle channel in Asia.

7. Tyler Ward
Subscribers: 1,973,369
From a little-known independent act online, Tyler has since expanded his fan base by touring with the likes of Switchfoot, The Fray, The Jonas Brothers, and The Beach Boys. His YouTube page is filled with song requests, both covers and originals.

8. Scheiffer Bates
Subscribers: 58,470
Scheiffer emulates the voices of your favorite TV and movie characters with minimal effort, including Jack Sparrow, Jessie Pinkman, and Jon Snow. His Christopher Walken and Morgan Freeman impressions are also spot-on, and it's a wonder he's not working as a voice actor.

9. Petra Mahalimuyak
Subscribers: 122,186
Petra Mahalimuyak's makeup and dance tutorials are equal parts legitimate and ridiculous, which explains why her videos keep getting the viral treatment. And if you can't get enough of her, we'll have you know that the Petra's also busy in Instagram and Snapchat.

10. AJ Rafael
Subscribers: 602,641
Filipino-American musician AJ Rafael has been serenading his YouTube subscribers for 10 years, and he doesn't plan on stopping anytime soon. Here's to hoping he releases another album soon!

We bet YouTube fans are super excitied for the upcoming YouTube FanFest Manila, happening on May 27at the World Trade Center, Pasay City. We heard that some of the best local and international YouTube stars are ready to spend the day with their fans! Here's a look at this year's lineup: 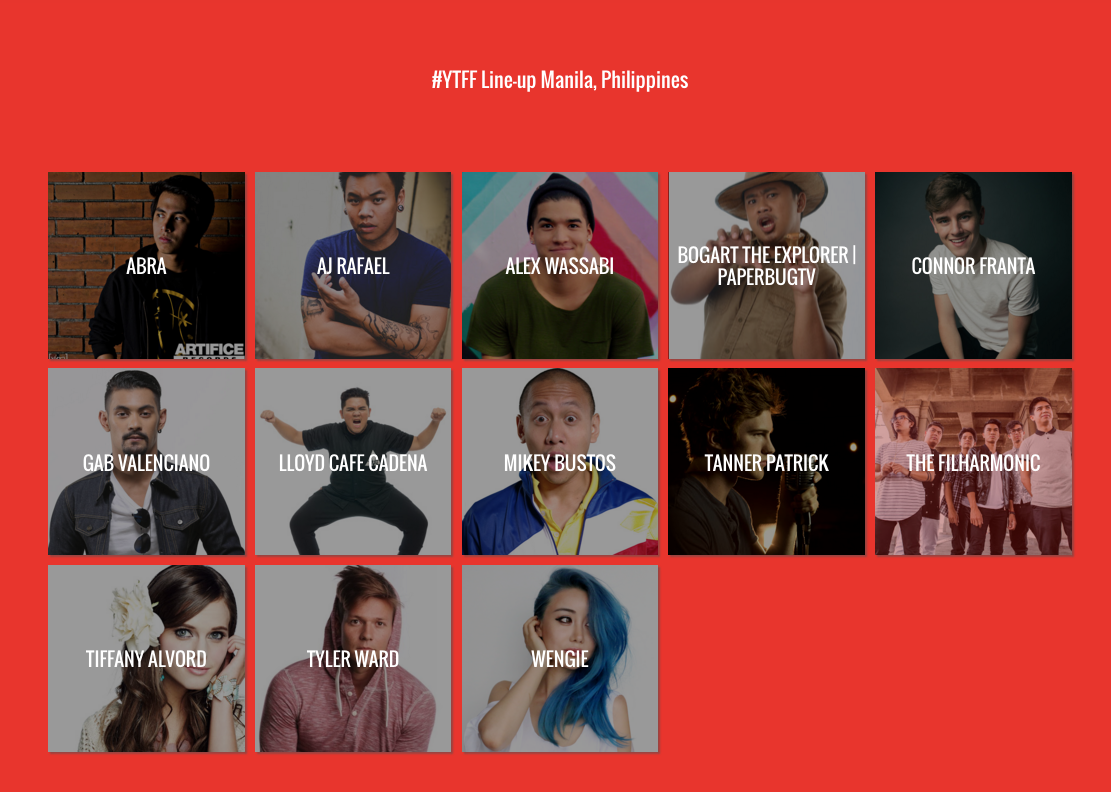 This year's YouTube FanFest Manila is presented by Globe Telecom, in association with Nescafe, Philippine Airlines, and official partners City of Dreams and Mazda.

You can also easily share with your friends how much fun you are having at the YouTube FanFest when you subscribe to your customized GoSAKTO promo! Apart from customizing your preferred call minutes, number of texts, and MBs for surfing, make sure to add your favorite social media apps, especially the YouTube app!

You may also join in the fun and click on this link to watch the YouTube FanFest live show on May 27, starting at 7:00 p.m.