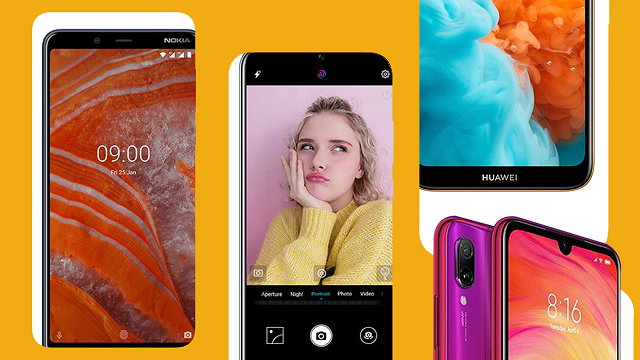 These devices cost less than your monthly milk-tea budget.

(SPOT.ph) Everyone is practically glued to their smartphones these days. If you’re looking for a new phone that won’t hurt your wallet, don’t worry. There are a lot of great options with specs that aren’t too shabby for something that’s less than P10,000. We round up the ones that won’t cost you more than your monthly milk-tea budget.

Sporting a “Dewdrop Screen” instead of the usual notch, Huawei’s budget Y6 Pro gives you more screen for a fraction of the price (a mere “drop” in your budget bucket, if you will). More than the beautiful HD screen, though, you get full-fledged LTE connectivity for super-fast streaming and the latest OS—Android 9 Pie for added security and compatibility. Tasty.

RealMe 3 has specs that will get you reeling. Dubbed as the “Entry Level King” by numerous tech pundits in the Philippines, it’s not hard to see why this super smartphone earned such a title: A large 6.2-inch HD screen for a superb viewing experience, 3GB RAM for multitasking, and of course, a MediaTek Helio P60 processor for just about everything else. Fingerprint sensor for extra security? Yep, it has that, too.

Forty eight. A forty-freaking-eight megapixel camera—let that sink in. When it comes to sheer resolution, there’s no other that can give the Redmi Note 7 a run for its money. Xiaomi even ups the ante by throwing in a depth-sensing secondary rear camera and a 13-megapixel front shooter for super selfies. The 4000-mAh battery and the 6.3-inch screen complement this pocket shooter’s imaging prowess well.

Oh look, another phone with a dewdrop display. Yay. Seriously, though, there’s more to this Vivo than meets the Y. Underneath its sexy shell is an Octa-Core processor and a large 4080-mAh battery that will enable you to play most of the games you love (read: Mobile Legends) to no end.

Don’t be too quick to discount Cherry Mobile because as far as bang-for-the-buck tech is concerned, the Flare S7 Deluxe has more than its fair share of tech: Notched HD screen, 3GB RAM, USB Type C, LTE, fingerprint sensor—sounds a lot like that other polarizing fruit brand, don’t you think?

Just look at this breathtaking piece of gadgetry. Go ahead, take a few seconds to take in that beautiful, shiny Sky Blue finish… Ready for this? It’s made of plastic.  Despite its choice of material, it's a well-made and well-priced phone complete with a Full HD+ waterdrop display for crisp images and a dual-camera setup for impeccable shots.

Good old Nokia is back and the 3.1 Plus is a throwback to its mantra of making phones that last—not just in terms of hardware, but software as well. You are looking at a “Google One” phone which basically means that the 3.1 will receive Android updates for the next two years. Definitely not a bad deal especially since it’s essentially guaranteed to be useful until 2021.

The newest and the freshest offering on this list as of writing, the Redmi 7 (not to be confused with the Redmi Note 7) is a reasonable gadget aimed at first-time smartphone users who don’t want a watered-down smartphone experience. Boasting niceties such as an easy-to-hold 19:9 aspect ratio screen, Face Unlock, and an Infrared blaster, this mobile blurs the line between entry-level and mid-range markets effectively.

A little dated but definitely not outdated, the M1 touts a capacious 5000-mAh battery, which makes it perfect for gaming, streaming, and chilling to music for hours on end. Its full HD screen does not scrimp on the pixels which goes great with its awesome dual rear camera setup. Best of all, the M1 has stock Android 8.1 installed, which is another way of saying that it delivers the Pure Android experience—just the way Google intended it.

Capping off this list is perhaps the most feature-packed of the bunch. The Y7 will make you say "Wow" ("wei"—sorry, we just had to) because of the bevy of AI-powered features such as AI-selfie which intelligently beautifies your mug, AI-battery management which intelligently consumes available power, and AI-enabled dual-rear camera for intelligent scene recognition. This device does put the “smart” in smartphone.

Shopping Gadgets Smartphones Asus Huawei Xiaomi Realme Nokia Cherry Mobile Vivo Honor Evergreen
Your Guide to Thriving in This Strange New World
Staying
In? What to watch, what to eat, and where to shop from home
OR
Heading
Out? What you need to know to stay safe when heading out